The Open Door Project on the Norfolk and Portsmouth campuses offers free support to ensure that students succeed at all aspects of their lives. 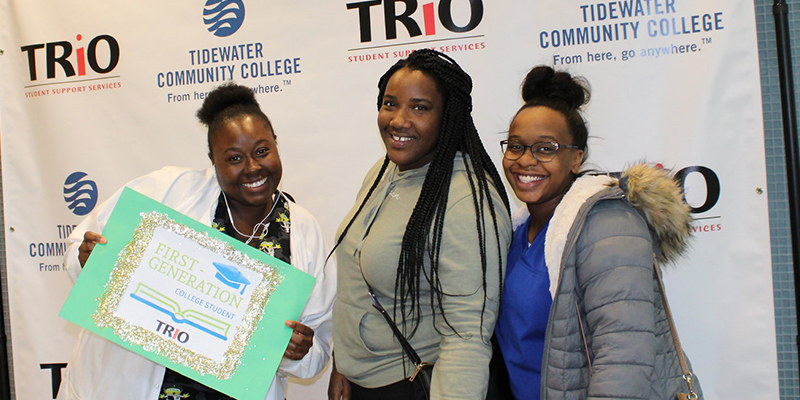 First-generation college students often have no one in their household to help them overcome the educational challenges they face.

“I almost quit,” said Shannon O’Conner, a first-generation success story who started by earning her associate at Tidewater Community college before moving to Old Dominion University for her bachelor’s and Norfolk State University for a master’s in criminal justice. “We’ve all gone through the same story. Hard times. Not sure what we’re going to do.”

TCC makes sure first-generation college students – or those whose parents or legal guardians did not complete a bachelor’s degree – don’t travel the road alone. The college’s Norfolk and Portsmouth campuses celebrated their first-generation students, faculty and administrators in events held in early November. The days were selected to coincide with the signing of the Higher Education Act of 1965.

The cities of Norfolk and Portsmouth each issued special proclamations recognizing first-generation college students. Along with popcorn, cotton candy and hot dogs, each event included inspiring speeches, banners for students to sign and “first gen” buttons. Students received free books titled “Every Student Has a Story.”

“If you don’t have the support at home, remember you have it here,” said Dana Hathorn, dean of student services at the Portsmouth Campus and a first-generation college graduate.

On the Portsmouth Campus, 53 percent of graduates are first-generation; Jeanine Anderson was one of them when she graduated last year.

“It’s never too late to start,” said Anderson, 45, who earned two associate degrees from TCC and works part time at the Open Door Project office in Portsmouth. “It’s never too dark. You can always come here and find the light and be the light.”

Like Anderson, alumna Cynthia Felton had to overcome homelessness to start college at the Norfolk Campus.  “Thanks to Open Door, I’m a success,” she said. “There’s no words when you actually succeed.”

At TCC Norfolk, 51 percent of graduates are first-generation.

Willette Hackney-Davis walked in the doors at TCC, working three jobs and relying on food stamps. The tools she learned through Open Door, where she now works as an academic advisor, helped her graduate from TCC and complete an advanced degree. “You have to find your open doors and then walk through them.”

Eligible students for Open Door receive free tutoring, study skill workshops and specialized financial aid advising. They can qualify for a laptop loan program. The students also can participate in cultural trips; this weekend the group is traveling to Washington, D.C., to visit the National Museum of African American History and Culture.

Portsmouth student Shanice Mills is among those planning to go. “It’s hard being a first-generation student; you don’t have the support system at home,” she said. “Being part of the Open Door Project, everybody’s helped me find support no matter what I do.”

For more information about the Open Door Project, contacts its director, Kay Williams, at kwilliams@tcc.edu.