She didn’t have a bed, enough food or even a car. At TCC she found a home and a future

Jeanine Anderson graduates with an associate with plans to finish another by spring before heading to Old Dominion. 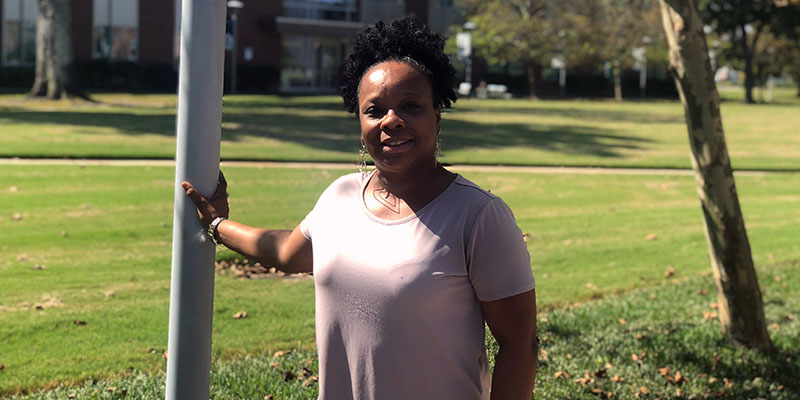 On Dec. 17, she will accept her Associate of Applied Science in Criminal Justice at the Ted Constant Convocation Center. She’s tacking on an additional semester of classes to complete her Associate of Science in Science, which will allow her to transfer to Old Dominion University next fall.

Anderson, 45, triumphed over living out of a car only to have it towed away with most of her belongings inside. She’s been hungry enough to rationalize pouring a pint-sized can of sausages into her purse while inside a discount store.

She’s found creative ways to get to class minus reliable transportation. She regularly made her way to the Portsmouth Campus hours before her 8 a.m. class so she could catch a ride with a friend en route to his shipyard job.

When the New Jersey native didn’t have money to join Phi Theta Kappa (PTK), she mopped floors until she saved up the $85.

Anderson arrived at TCC broken and leaves it whole thanks to a village of mentors and resources that contributed to her journey. She rattles off the names of women who are mentors – administrators Karen Moore and Okema Branch, deans Dana Singleton and Jenefer Snyder and Provost Michelle Woodhouse. 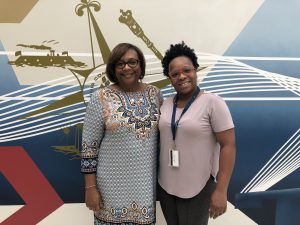 “I finally feel like I am in a place where nobody wants to hurt me,” Anderson says. “Nobody laughs at me for feeling or doing or saying anything. This is a very safe space for me. TCC is home.”

It took three tries before Anderson actually walked through the doors at TCC. Her life had turned into a rollercoaster after a messy divorce forced her to leave New Jersey when she lost her home to foreclosure.

Her mother lived in a low-income one-bedroom apartment in Suffolk. The two weren’t close, but it was a place where Anderson could shower and sleep on the floor on particularly cold nights.

A 2006 blue Chrysler Sebring convertible became her bed and closet. “I couldn’t use it as a convertible,” she says. “All my stuff was in it.”

Anderson searched for jobs but found none. She had worked before – in fast food, at a call center and teaching preschool in an underprivileged area. But nobody was biting this time around.

“No one would even hire me to scrub toilets at 4 in the morning,” she says.

Anderson knew a degree would be the game changer for her future. When she worked up the courage to go inside Building A in Portsmouth, she met Moore.

“My fairy godmother, my Glinda from ‘The Wizard of Oz,’” she says.

Moore walked her through the admissions process and helped her navigate domicile issues for financial aid as Anderson had no recent income tax records. She also directed Anderson to Open Door Project, a federally funded support program for first-generation college students.

“I realized there were others like me who needed help,” she says.

Anderson was a sponge from her first semester at TCC in August 2016. She met Eric Styles, a financial aid coordinator, who chose her to be the emcee of an Open Door leadership conference. She promised herself never to turn down an opportunity to grow.

“I was terrified; they were impressed,” Anderson says.

Styles introduced Anderson to Woodhouse and Branch. Anderson connected with Singleton, too, all women who exemplified the type of person she wanted to be.

“I gleaned whatever I could from them – how to talk, how to dress,” Anderson says. “I grew up in a family full of women, but nobody taught me anything. I came here looking for advice and guidance and took everything they had to give.”

During her third semester at TCC, Anderson became president of Portsmouth’s Student Government Association behind a platform that encouraged inclusivity. She got an invite for PTK, the honor society for two-year college students.

“The application fee was $85 and I didn’t have it,” she says. After a few months of odd jobs, she collected enough and is now an active member who helps out with marketing.

Anderson has been a Work-Study student for TCC Professor Rick James and a student teacher for criminal justice, a field she plans to continue in by studying for her bachelor’s with a minor in criminal psychology.

“I want to counsel,” she says. “I want to be an advocate for young people who go through the adjudication process. Even though we’re a society of convicts, we’re not a society of people who understand the Constitution.”

From here, all that will be possible. She’s now the example for daughter Kennedy and granddaughter, Sa’rai, 2.

“I feel loved and accepted here,” Anderson says. “At TCC, you’re pushed and stretched and disciplined and rewarded. You’re inspired and empowered. Here you find the courage to attain your goals.”