We’re picturing a brilliant future for this TCC artist

Aminah McKenzie is a social media celeb with a Twitter following that exceeds 14K. The TCC student will graduate next summer with an associate degree in studio arts. 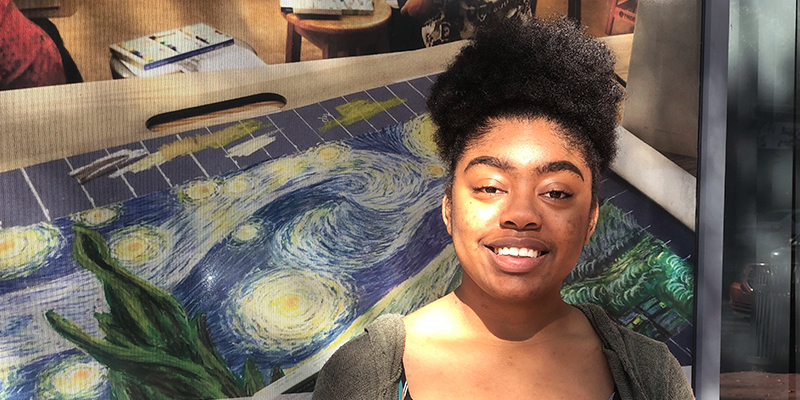 “Can I borrow your camera?” eighth-grader Aninah McKenzie asked her mother one day.

Who could have predicted where that would lead? @aminah_mck boasts more than 14,000 followers on Twitter. McKenzie, now 22, is an Instagram darling, too, who’s been featured in Buzzfeed. Once upon a time, she took photos; now she schedules photo shoots far beyond that first simple snapshot of a backyard flower.

The Western Branch High School graduate is in full bloom at Tidewater Community College, where she is pursuing a studio arts associate degree. With the foundation she’s earning at the Visual Arts Center, she plans to eventually transfer to either VCU or Norfolk State University.

“Basically, I want to take pictures of people for the rest of my life,” said McKenzie, who adores fashion photography and recently started her own business. “I want to work in magazines and campaigns for brands and even shoot behind-the-scenes photos for music and movie videos.”

Her grades in high school weren’t the best. That meant McKenzie’s college list was limited. TCC made sense given its proximity and her ability to use her father’s GI Bill benefits to pay the full cost of tuition. It turned out to be a better choice than she could have imagined.

“I knew the VAC was here, but when I found out more about it, I realized it was great,” she said.

McKenzie credits the faculty and peers at 340 High St., with fostering a unique learning environment.  “Everybody is here to create,” she said. “Everyone is super excited about their work. The professors really help.”

Ticking off examples, she notes instructor LaKaye Mbah, who urged her to expand her thinking beyond snapping pictures for fun.

“She wants her students to picture themselves beyond the classroom,” McKenzie said. “It’s not so much about taking photos. She wants you to think about what you’re going to do with them.”

A Fundamentals of Design class sharpened McKenzie’s attention to detail and fine-tuned her photo editing skills by teaching her about color. Professor Tom Siegmund isn’t shy in his critiques, a plus, she said, for a serious artist.

As a VAC student, McKenzie can bring models into the photography studio. They’re often stunned by the state-of-the-art space and ask, “What school is this again?”

Her portfolio continues to expand with projects that range from “Girls,” inspired by the use of color in the film “The Grand Budapest Hotel,” to “A Story About Love,” an offbeat engagement shoot for two clients.

Her business, Aminah McKenzie Photography, is growing. One of her social media shoots went viral, prompting Teen Vogue to invite her to New York to shoot its entire staff. She specializes in portraits and faces, though a photo she submitted of Western Branch Park will be one of 12 in the City of Chesapeake’s 2020 calendar.

McKenzie will graduate from TCC next summer.