From here to the Founders Inn 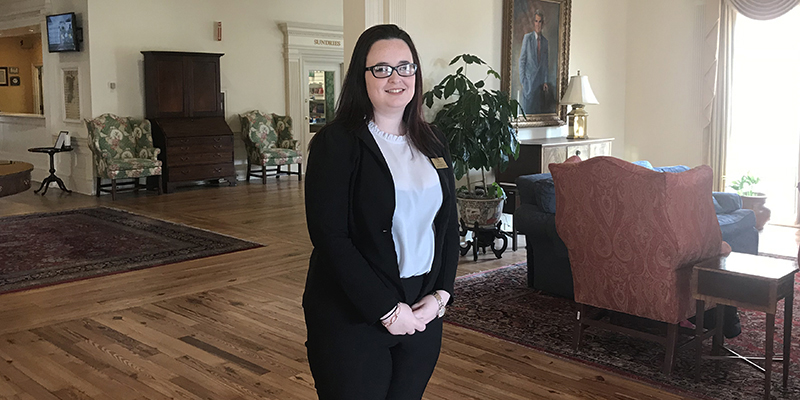 When Trisha McPherson started Tidewater Community College, it was without an idea of how she would secure a future for herself and her twin daughters.

A month after graduating, she’s standing behind the front desk of the Founders Inn & Spa employed in a career field she loves that offers plenty of room for advancement.

McPherson started at the Virginia Beach resort nearly a year ago to complete hours for the Associate of Applied Science in Hospitality Management. A part-time job has since turned into a full-time position and a promotion to lead front desk agent.

As a student at Oscar Smith High, McPherson struggled to concentrate. After graduating in 2012, she realized she wasn’t ready to go away to a four-year school nor did she have the resources to pay that kind of tuition. Initially, she thought she’d raise her GPA at TCC and then transfer to a four-year school. But the more she learned about TCC’s hospitality program, the more interested she became.

“We went to a lot of different meet-and-greets, meetings and conventions,” McPherson said. “Meeting people and hearing what they do in the industry really helped me learn.”

Plus she liked that she could earn a marketable degree in two years. Virginia Beach is a ripe area for tourism, the second largest revenue generator in the city.

“I fell in love with a degree that I don’t need to go to a four-year school to achieve,” she said. “But if I want to, I can still do that.”

Scholarships helped pay her tuition. McPherson twice received a $2,000 scholarship that helped with costs, and she graduated debt-free.

Ultimately, McPherson would like to advance within the Founders Inn and become a conference service manager. “I want to someday own my own event planning company,” she said.

She’s grateful for the role TCC played in helping her find her passion.

“TCC actually helped me relearn how to learn,” McPherson said. “I’ve never been an education person. I didn’t care about grades or schoolwork for a long time. There they really showed me how I could use what I learn in the outside world. TCC really helped me love learning again.”