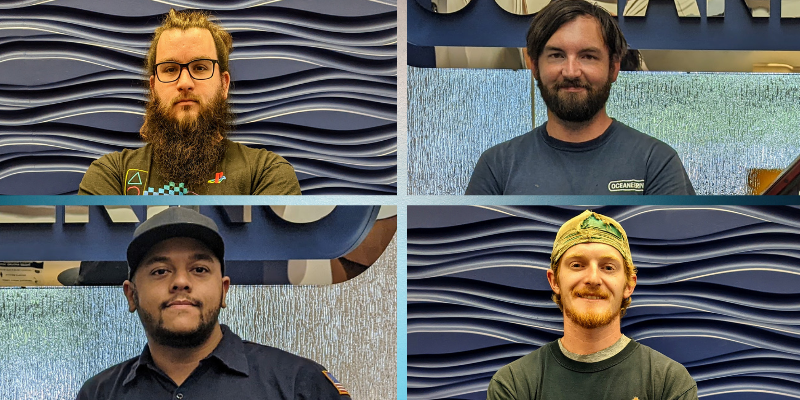 Tidewater Community College is proud to recognize four apprentices on track to becoming certified journeymen in their trades. A journeyman is a worker skilled in a trade or craft who has successfully completed an official apprenticeship qualification.

All four are part of the Oceaneering Marine Services Division apprentice program with TCC as their academic partner. All are full-time employees of Oceaneering and earn while they learn on the job, gaining knowledge and skill by working with seasoned craftsmen.

“I’m thrilled to see our apprentices excelling in their chosen fields,” said Guy St. John, Apprentice Program Manager at Oceaneering International. “Earning the certificate of completion as journeymen is not an easy task. The maritime industry is early hours and physically demanding. And these employees have added higher education to their already full schedules.”

John “Mikey” Pishnock, 29, started as a welder at Oceaneering in 2014 and has been part of the apprentice program since 2018. He is a third-generation welder, as were his father and grandfather before him. Mikey is taking a different professional track by working his way into a leadership role in the company. He currently works in the Planning division and is studying for the Project Management Professional (PMP)® certification, a globally recognized certification that tests a candidate’s ability to manage the people, processes and business priorities of a professional project.

He earned two Career Studies Certificates from TCC, one in Welding and the other in Maritime Technologies. “My TCC courses helped me to learn to think more critically,” he said. “Also, getting out of the welding booth and doing more has been beneficial for my growth.”

Mikey is continuing his education at Old Dominion University where he is working on a bachelor’s in industrial technology with a focus in supervision.

“I’m glad I started in welding because it gives me a good idea of the work involved. You have to go through the ranks to move forward in leadership,” he said.

Mikey says he wishes he had started earlier. “TCC’s professors are there to help you one-on-one. They will come in early or leave late to make sure your questions are answered.”

“Anybody can excel in this program,” he added. “All it takes is a good attitude. Also, you have to be coachable and willing to work hard.”

Mikey was nominated for the Outstanding Junior Tradesman of the Year by the Virginia Ship Repair Association and earned his journeyman certificate in 2022.

Christopher Muhlbaier, 33, is a Hickory High School graduate and Chesapeake resident who earned his accredited journeyman certificate in 2022. Chris is an outside machinist and has worked on U.S. Navy surface craft and submarines on alteration installation teams.

He joined the apprentice program in 2018 and has since earned Career Studies Certificates in Marine Mechanical and Maritime Technologies.

“It’s very rewarding being part of the Navy support system and making sure our sailors have what they need to work, when they need it,” he said.

Chris says he wanted to continue his education and found this a cost-effective way to do just that.

“I came to TCC right after high school and took computer science classes. I wasn’t ready for college then and spent the rest of my 20’s in retail,” Chris said.

He added, “This time around I was ready. I found my professors to be very helpful and, between the staff at TCC and Guy, I always had some way to get help if I needed it.”

Chris’ advice for future apprentices is simple: “Keep up with your schoolwork and stay ahead of assignments and tests. As long as you have the mindset to learn, just about anyone can be successful.”

Spencer Ottey joined the apprentice program in 2019 and will earn his journeyman certificate in 2023. This year he was nominated as the Junior Trades Person of the Year by the Virginia Ship Repair Association.

He says, “This industry is physically and mentally challenging, and the work requires a high level of skill. I’m really proud of being recognized in this way.”

A Granby High School graduate, Spencer took welding classes at TCC before coming to Oceaneering.  “Getting to learn from some of the best in the field gave me a real boost. I can’t say enough about my instructors: Mr. Duke, Mr. Moody and Mr. Nimes. They were all excellent,” he said.

Spencer said that traditional college wasn’t a reasonable goal for him as he doesn’t enjoy sitting in a classroom, but prefers working with his hands. “The welding apprenticeship was a great fit because I got to learn from experienced craftsmen. They know the techniques and just watching them work, you learn so much. My mentor was Tim Kamits and I wouldn’t be in the position I am now without him.”

Spencer is a few classes away from earning an associate degree. He also has Career Studies Certificates in Welding and Maritime Technologies.

“It’s pretty intense building these crazy structures on submarines to ensure they can be repaired and ready for deployments,” he said. “It feels good knowing we are helping to defend our country and supplying the Navy with well-maintained ships and subs and helping get our service men and women home safe.”

Spencer says the thing he enjoyed most about TCC was that the classes matched up with industry needs. “Every class has a direct purpose on the job and that’s what makes the learning so phenomenal.”

As for advice for others, Spencer says, “Always be a team player and take your time to learn. There are no shortcuts. Work hard and stay safe.”

Gunner Standing grew up working for his father in the family construction business, pouring concrete and building homes. He is no stranger to hard work, having grown up in a rural part of Pungo where there were endless chores to do.

When the time for college came around, Gunner, 25, opted to go to work instead. “Some of my friends were doing odd jobs, but I was looking for a career. When I got into welding, everything just clicked.”

Gunner joined Oceaneering in 2019. From the start, his work was noticed by the seasoned welders on the job. “Welding is what I was meant to do, and the older guys were always there encouraging me,” he said.

“I had some confidence issues growing up but doing welding work changed all that.  It’s so beneficial to work with skilled tradespeople as you see how to do things right every day,” he said.

“I tell everyone to talk with the people at TCC. They are there to help. I’m encouraging many of my friends to come here and give this work a try. That way when I’m a supervisor, I will really know the crew,” he said with a laugh.

For those coming into the program next, he says, “Don’t come in thinking these classes are easy. And get very good at time management because you are going to need it. Have your weeks planned out, do meal prepping and laundry on a schedule.”

Gunner has earned a Career Studies Certificate in Welding and will soon complete another certificate in Maritime Technologies.

Gunner added, “It’s important to love what you do. There are many areas in the apprentice program. Pick the one that is right for you.”

Gunner will earn his journeyman certificate in 2023.

For information about TCC’s apprentice programs visit here. If your organization is interested in starting an apprentice initiative, contact TCC’s Apprenticeship Program Coordinator Shane Kiernan at 757-822-1504 or email apprenticeship@tcc.edu.