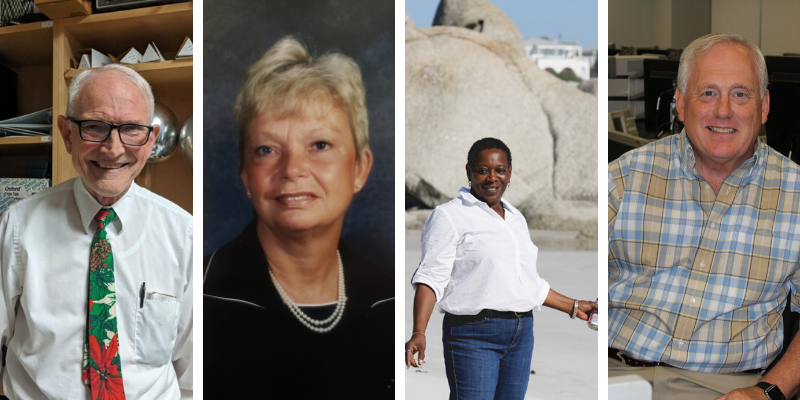 Four professors at Tidewater Community College recently achieved emeritus distinction thanks to their contributions to academia and student success.

TCC alum Koon initially taught at the college as an adjunct before moving into a full-time position in 1978; he was the first instructor and initial program head for Electronics Technology. When he started, the college had nothing but borrowed electronics equipment. Koon worked tirelessly to upgrade the college’s facilities that make TCC a respected national leader in the field. He established continuing partnerships with Old Dominion University and Norfolk State University. Named TCC’s inaugural Professor of the Year in 2001, Koon leaves behind a legacy of successful graduates, including all who serve as adjunct instructors in Electronics Technology. Koon retired in 2018.

In his words: “I loved working with the students. They would stop by the office and talk. They were so optimistic about the future. You can’t help but get drawn into their optimism. After two years, it’s like they become your child. I still have students calling me. They keep you young. In total, I was at the college for 43 years. I can honestly say I enjoyed almost every day.”

Virginia Tech alumna Dozier began teaching at TCC as an adjunct instructor while raising six children. By January 2000, she began her full-time career at the college that included two decades of teaching information technology. Dozier developed and taught nearly a dozen IT courses, mentored new faculty and is co-author of various textbooks. Her multiple service projects included working in various roles at Virginia Beach high schools to further math and science education. She retired in 2019.

In her words: “My favorite part of teaching at TCC was the opportunity to meet so many students every 16 weeks. I quickly realized the blessings and enriching interactions these students provided to my life. Teaching and learning is a two-way street. I will always be thankful for the many lives that touched mine.”

Named professor emerita posthumously, Wood served TCC for 20 years before her sudden death in September 2019. Known for her vibrant personality on the Portsmouth Campus, Wood enjoyed finding engaging ways to connect with students. She designed courses that integrated African American literature and took a lead role in the college’s annual literary festival. Wood was a mentor at the Writing Center, advisor to the Rotaract Club and an instructor for multiple TCC summer camps. Wood received the college’s Dr. Martin Luther King Jr. Distinguished Service Award in January 2020.

In the words of her friend and colleague, TCC English Professor April Campbell: “Her legacy lives on through the many people she inspired. Her charismatic teaching methods made students feel comfortable and accepted, and many students have praised her for being available and approachable.”

Wright needs little introduction; he is TCC’s first viral professor thanks to a Twitter post from one of his students last December. Wright’s innovative, hands-on teaching style made him a student favorite. To make science fun and relatable, he performed experiments that range from walking on a bed of nails to jumping up and down on a pogo stick to using a slingshot. He started at the Virginia Beach Campus the same year it opened, 1974, and retired in 2020 as physics chair. Wright completed bachelor’s and master’s degrees at Brigham Young University and his doctorate at Virginia Tech. Wright was TCC’s Professor of the Year in 2017. As one colleague wrote on a recommendation letter, “If David Wright does not qualify for emeritus status with the college, then no one else could ever qualify.” He will continue teaching classes at TCC as an adjunct.

In his words: “My favorite part about teaching was the students. They were terrific. They energized me. I loved trying to get them excited about science.”