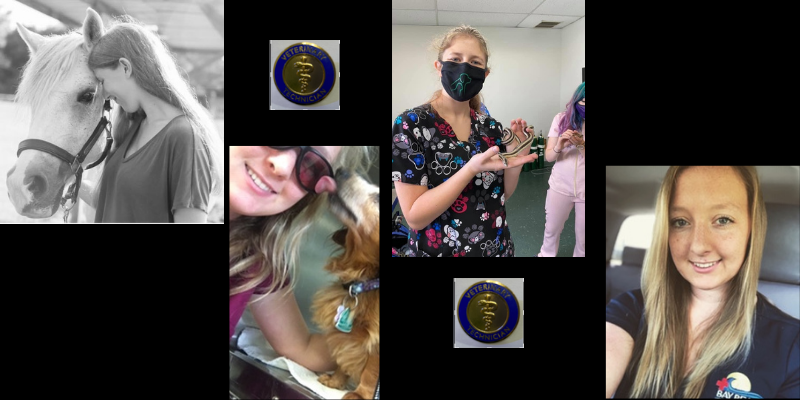 The classmates are part of TCC’s inaugural group of graduates from the Veterinary Technology program that launched two years ago. The only program in Hampton Roads and the first new one in the state in four decades provides instruction in the behavior, care and treatment of animals. Graduates earn a 63-credit Associate of Applied Science in Veterinary Technology.

The 20 pioneer graduates will be recognized at a pinning ceremony on Saturday at the Virginia Beach Campus. The ceremony will be streamed on TCC’s YouTube channel at 3 p.m.

“This pinning ceremony is the culmination of years of planning and hard work by the TCC administration, the local veterinary community and veterinary faculty, and obviously the students who worked so hard to complete the program requirements,” said Megan Taliaferro, program director. “I’m incredibly proud of the students for this personal and professional achievement and look forward to the great things they will do in the Hampton Roads veterinary community.”

Bernard and Littlefield grew up figuring to be veterinarians one day given their passion for animals big and small. In addition to several dogs and a cat, Bernard dotes on her chinchilla, Scabbers (named for Ron Weasley’s rat in the “Harry Potter” series) and ferret, Alexei (after the Russian doctor in “Stranger Things”). Both are rescues.

“I love exotic animals,” said Bernard, who particularly enjoyed the lab on exotics that Taliaferro arranged for the class. “I’m drawn to anything funky and quirky.”

Littlefield’s lot includes four dogs, a cat and a thoroughbred, Hamilton, that she enjoys showing.

“Ever since I was little, I loved dogs and I had a dog growing up. He made me fall in love with them,” she said. When I was 8, my neighbors gave me my first pony.”

Littlefield, 27, holds a bachelor’s in biology from Longwood University and actually applied to vet school twice only to get waitlisted. Ultimately, like Bernard, she decided she was better suited to be a veterinary technician.

Vet technicians are largely hands-on, and unlike vet school, tuition for the program is not in six figures.

“I don’t come from a lot of money,” Bernard said. “My guidance counselor told me that TCC was starting a program, and I thought I’d be a good fit.”

Even if that meant driving 90 minutes one way from her hometown, Nandua. With Pandora as her company, Bernard, 20, learned to embrace the commute listening to “my own concert in the car.”

The research component of veterinary technology fascinates Littlefield. “Having the license and program under your belt can open a lot of doors,” she said.

She developed a particular affinity for Chinese medicine and acupuncture. “I would love to explore the more natural side of things,” she said.

Both found camaraderie among their classmates at TCC.

“I really loved it,” Bernard said. “Everyone was super helpful. In a two-year program, you have to work fast and work together to learn what you need to learn. The professors were always willing to have a meeting, even if it wasn’t during a time during school.”

“It was very hands-on,” Littlefield said. “There were several different labs where we put ourselves in real situations. It was fast paced, but we definitely learned a lot more in that program than we would have in any other program.”

Littlefield passed the credentialing exam and awaits her license in the mail. She will continue to work at Bay Beach Veterinary Hospital.

Bernard, who works at Atlantic Animal Hospital in Accomac, will take her exam in November.

Saturday’s pinning marks a milestone for both.

“It represents all of our accomplishments,” Littlefield said. We’ve completed the entire program all together, and we’re going to finish it together.”