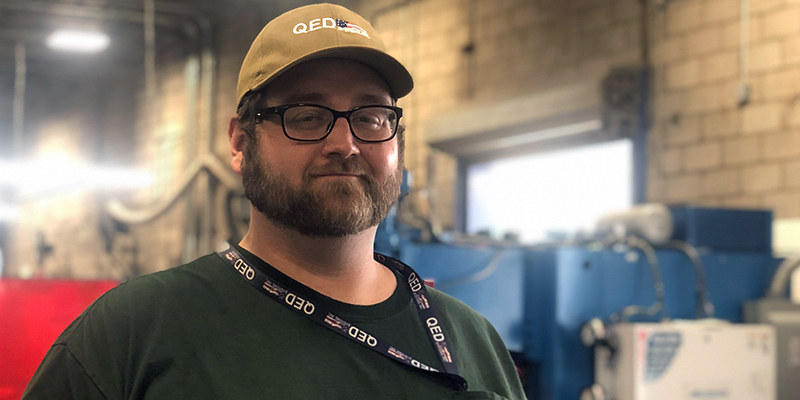 Jonah Mericle isn’t your traditional engineer. He doesn’t have a four-year degree or wear a suit and tie to work.

He graduated in 2014 with a two-semester Career Studies Certificate in Computer-Aided Drafting & Design from Tidewater Community College, which laid the foundation for a future in drafting and design.

“TCC was the start to being successful in a position with zero experience,” said Mericle, recently hired as a design engineer at QED Systems Inc. in Norfolk after spending five years at nearby Tabet Manufacturing.

Mechanically inclined, the Booker T. Washington High graduate got introduced to drafting as part of a now-defunct vocational education program through Norfolk Public Schools. He didn’t have money for college – in fact, he became a father as a teenager — but received enough financial aid to pay for tuition and books.

“It was pretty sweet,” he said. “I had my daughter at 18 and was working a low-end job trying to get somewhere. TCC gave me the tool set to pursue a better option, to create a great life for my family.”

Mericle became proficient in AutoCAD through TCC’s hands-on curriculum that reflects current industry standards. Mericle thrived in the program despite struggling with calculus. He credits TCC’s math lab for the C he pulled.

“That was success,” he said. “I spent three or four hours a day in there every week to get that.”

Prior to finishing his coursework, Mericle was “hired” as a drafter at Tabet, which offers custom design solutions for the military and industrial and commercial customers.

“I had 30 days to either stay hired or be fired,” said Mericle, who created a package of 60-70 drawings that earned him the full-time position in just over two weeks.

Mericle initially drafted working drawings under the supervision of engineers at Tabet. Once promoted to design engineer, he went to work designing command system consoles for military ships. Teaming with Tabet, he started his own 3D printing company, Tadlock Engineering.

“Everything from the cabinets to the layout to the floors to the walls,” he said.

At Tabet, he hired drafters and turns to his alma mater first.

“I look for TCC graduates because I know how they were trained,” Mericle said.

Mericle recommends the trades as a viable career path, especially to millennials.

“It helps to be able to visualize in 3D,” he said. “This generation has been force fed that since day one thanks to video games.”

Mericle also touts the growth that a trade career offers. “This one degree can lead you to CNC programming, sheet metal mechanics, anything in manufacturing, “ he said. “Go on Indeed or Google and look up CNC programmer or underwater welder and compare it to what an engineer makes. It’s not even close.”