The TCC Perry Center will house the Jim A. Hixon Atrium. Three academic kitchens will be named the RZ Restaurants Kitchens. 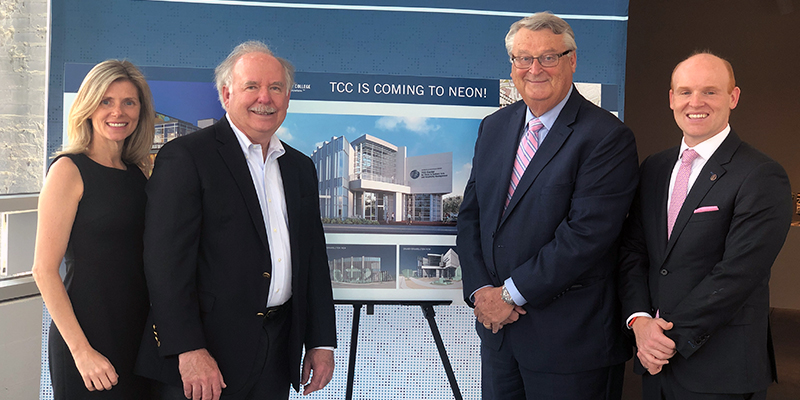 The TCC Perry Center for Visual & Culinary Arts and Hospitality Management, scheduled to open in fall 2021 at the site of the former Greyhound bus station, promises to energize the downtown area with expanded offerings in the college’s comprehensive culinary and visual arts programs.

The first floor of the 43,000 square-foot TCC Perry Center will house the Jim A. Hixon Atrium. Three academic kitchens used for the college’s restaurant management program will be named the RZ Restaurants Kitchens.

“For nearly 30 years, Jim Hixon has stood as the model of what a business, volunteer and philanthropic leader should strive to be in our Hampton Roads community,” said TCC President Gregory DeCinque. “As TCC embarks on one of the region’s largest economic development projects, we are honored to have Jim help lead the way.”

TCC and Hixon declined to disclose the amount of the gift.

While Hixon has no official ties to TCC, he said he is inspired by its commitment to establishing a footprint in the NEON District. Passionate about the arts, he envisions a hub at the corner of Brambleton and Monticello avenues where the new TCC building will be located.

The City of Norfolk donated the land to the TCC Real Estate Foundation last year.

“It’s a great project,” Hixon said. “It will continue to transform downtown Norfolk. Probably the most exciting part is what it’s going to do to the NEON District. It will bring all these students downtown to experience the arts and culture in the area.”

Hixon, an alumnus of William & Mary’s Marshall–Wythe School of Law, has been a benefactor to both his alma mater and Old Dominion University. The James A. and Robin L. Hixon Center for Experiential Learning and Leadership at William & Mary was dedicated in 2017. The Hixon Family Scholarship Endowment provides scholarships to William & Mary undergraduates from African countries.

The two-story TCC Perry Center will also house a student-run outdoor cafe open. Dual enrollment expansion is in the works with Norfolk Public Schools, and Hixon is particularly excited about the college’s first restaurant management program in Norfolk. Currently, the college offers hospitality management only on its Virginia Beach Campus.

“It will expand the talent pool of professionals in that industry,” Hixon said. “And if we have students in kitchens learning how to be chefs and they keep seeing RZ Restaurants, maybe they’ll think about applying to one of our restaurants when they graduate.”

The Houston “Hu” Odom Jr. School of Culinary Arts and Restaurant Management at the TCC Perry Center is named for Hu Odom, president and founder of BOTH, Inc., a franchisee of Golden Corral Restaurants.

Odom’s seven-figure gift, made last December, is one of several the TCC Educational Foundation has received in support of the project, funded by some college general funds but mostly by private donations raised through Go Further! TCC’s Campaign for a Competitive Workforce.

Norfolk’s Patricia and Douglas Perry are the lead donors in the initiative.

The Hampton Roads Community Foundation recently awarded the college  $500,000 over the next five years to help build the TCC Perry Center. TowneBank gifted TCC with a $500,000 grant toward that effort and expansion of the college’s Regional Automotive Center.

For more information about donating to TCC’s Campaign for a Competitive Workforce, contact Steven Jones, executive director of the TCC Educational Foundation, at smjones@tcc.edu or call 757-822-1572.