TCC provided a compass for Class of 2020 grad Joe Baca

The Ocean Lakes High alum persevered to finish what he first started in 2012. 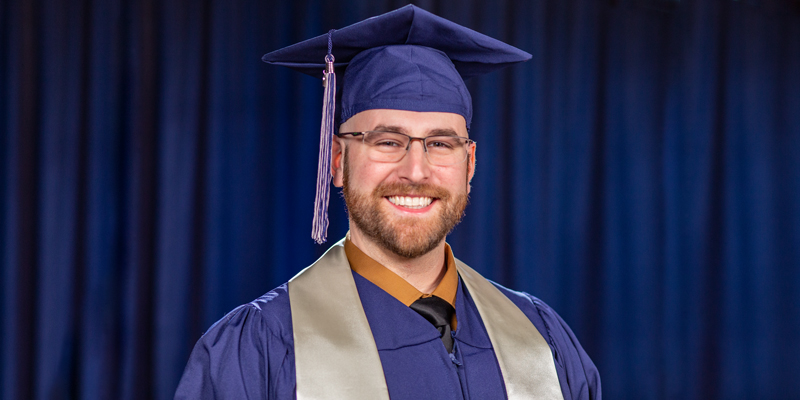 For a long time, Joe Baca searched for a direction. He didn’t apply himself in high school. He traveled after that only to realize rest stops aren’t ideal places to sleep. He even tried classes at Tidewater Community College.

The first time it didn’t work out. The second time — today — he graduates with an Associate of Science in Social Sciences and is one of the speakers for the graduates at the virtual 71st Commencement Exercises.

“Perseverance is really big,” says Baca, 30, who started at TCC in 2012. “Even during the times I thought it was pointless, I kept going.”

The son of Navy parents, Baca moved here in 1998 and graduated from Ocean Lakes High in 2009, admittedly bored by the classes and critical of his own bad choices. From there, he relied on his Honda beater car to traipse around the country, working in kitchens to keep himself financially afloat.

“A couple of nights when I was traveling, I slept in my car,” he says. “Once I actually woke up to somebody jigging the handle to try to get in.”

He went on to work with troubled youth at a camp in Grand Rapids, Michigan and did similar work at a church — stints that made him realize he wanted to mentor middle- and high-school aged students. That’s when he realized he wanted to be part of the school system, only, “I didn’t know how to do that.”

He did know education was key, so he returned to TCC with a purpose. After his first psychology class, he discovered a passion, one fostered by Professor Andrea Palmisano.

“I was still going through the motions, but I had a spark of interest in psychology,” he says. “She was so genuine, and she’s so passionate. She really cares about her students.”

She motivated him to become part of the TCC community. He joined the psychology club, serving as treasurer and later president. Rather than grumble about the virtual nature of activities due to the COVID-19 pandemic, he embraced them, enjoying one talk on racial injustice and another on the importance of remaining connected in a divided country.

He got a job on the Virginia Beach Campus as a work-study student in the dean of students office.

“The more knowledge I gained, the more I realized that education is worth investing in to understand what’s happening in the world around you,” Baca says.

Taking an active role in the community grew to be increasingly important. Baca formerly volunteered on the Norfolk Campus for the Foodbank of Southeastern Virginia & the Eastern Shore. He’s also tutored his peers in math.

“It sounds cliché maybe, but I really like helping people any way I can,” he says.

Now he has a list of goals, the most significant of which is going into educational psychology. He’d like to work in a school setting and mentor youth with a vision of helping boys who have suffered trauma discover coping mechanisms.

Baca is awaiting word on acceptance from a trio of schools that include the College of William and Mary, University of Virginia and James Madison University. He plans to earn his bachelor’s in psychology with a minor in education.

His graduation day message speaks to the perseverance that lifted him to this pinnacle. Early on at TCC, he didn’t qualify for financial aid. Sometimes he could only afford a class or two per semester. With aid in place this final semester, he’s been able to focus on his studies and will graduate with a 3.4 GPA.

He will share a Bob Dylan quote in his graduation speech. But another by Calvin Coolidge is also a favorite:

Nothing in this world can take the place of persistence. Talent will not; nothing is more common than unsuccessful men with talent. Genius will not; unrewarded genius is almost a proverb. Education will not; the world is full of educated derelicts. Persistence and determination alone are omnipotent. The slogan Press On! has solved and always will solve the problems of the human race.