Today we recognize the sacrifices made by veterans and their families to protect freedom. Thank you for your service to the nation. 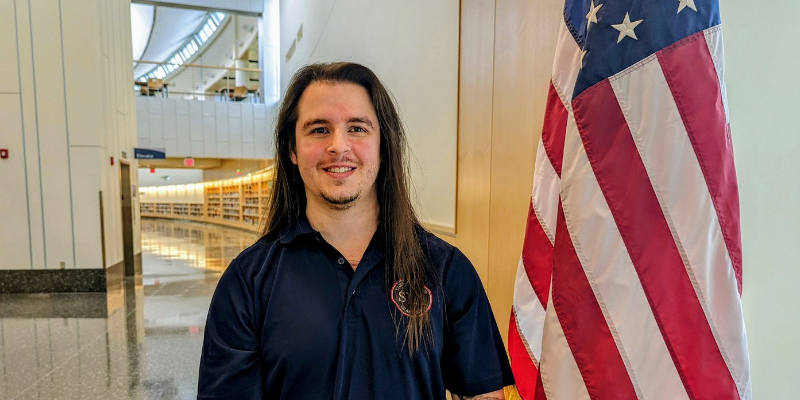 Logan Campbell is one of the thousands of students who came to Tidewater Community College to train for a new career after serving in the United States Armed Forces.

Campbell, 32, spent a decade in the U.S. Army as a veterinarian technician caring for military working dogs, horses and other animals. He is pursuing a General Studies degree to prepare to enter the college’s Radiography program.

“When I was looking for schools, I could have chosen any college up and down the Eastern seaboard. I selected TCC because of the high pass rates for radiography grads,” he said.

Campbell’s transition to college life was eased by support from TCC’s Center for Military and Veterans Education where staff helped him navigate veterans’ services and apply for the Post 9/11 GI Bill.

His decade-long work in the Army began at Lackland Air Force in Texas where all military working dogs are trained. He continued at Fort Carson in Colorado caring for more dogs, horses and even some Falcons that are mascots of the Air Force Academy.

“I loved my career in the Army and enjoyed patient care with our animals. From critical care work to surgery, there was always something new to learn,” he said.

Campbell’s last mission was a joint humanitarian tour with the U.S. Navy, followed by an assignment as the senior vet tech on the veterinary surgical team in Seoul, South Korea.

When he returned to the states, he left the military and was working as a vet tech at Tufts University. He got moved to diagnostic imaging and was supervising radiography techs when he discovered that his skill set could lead him to a new career.

“From the start, I found a passion for imaging and with the competitive pay, it was a no-brainer to make the switch,” he said.

While at TCC Campbell has maintained a 3.87 GPA and is a member of Phi Theta Kappa, the honor society for two-year schools. He is also involved with the Student Veterans of America chapter at TCC. “There is very much a culture shock coming out of the military and being a civilian again. Having a network of people to talk with and support you has made a big difference for me,” he said.

Campbell added that returning to the classroom in his 30s has gone more smoothly than he imagined. “I’ve been well supported on my journey,” Campbell said. “My professors put out a lot of information each class and prepare us well for exams.”

In his free time Campbell spends time with his girlfriend Lexi and their rescue animals including a Belgian Malinois, a military working dog reject turned family pet, as well as four cats, a couple of snakes and a parrot.

TCC welcomes close to 8,000 veterans and military-related students on its campuses. In fact, one-third of TCC’s student body are veterans and their families. To find out more about TCC and its program and services for veterans, email enroll@tcc.edu or call 757-822-1111.