“You are never too old to get a degree and start a new life. If I can do it, so can the next person." -- Sylvester Wilkins 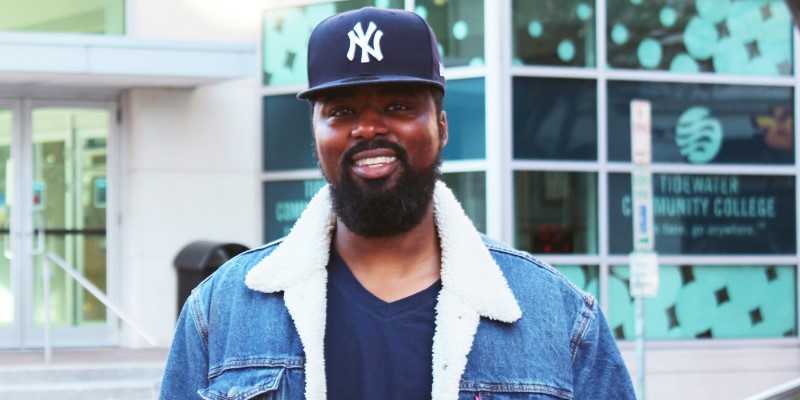 Sylvester Wilkins says his son Zione provided the inspiration for his return to school.

“He told me to just do it,” Sylvester said. “It was the little nudge I needed, and every success was because I didn’t want to disappoint him.”

Wilkins, 39, will walk across the stage during Tidewater Community College’s 75th Commencement Exercises earning an Associate of Science in Social Sciences.

For Sylvester, it’s been a long road to his associate degree.

He’s overcome alcoholism, homelessness and an epilepsy diagnosis that resulted in the loss of his driver’s license for 14 years.

“I ended up living with family and depending on them to get around,” Sylvester said. “From there, I lived place to place until I was homeless. I then lived in bus and train stations and washed up there so no one would know I was homeless.”

In 2018, Sylvester had corrective brain surgery to help alleviate his frequent epileptic seizures. The surgery was a success although the recovery was difficult, and Sylvester spent three months learning to walk again.

Soon after, Sylvester enrolled at Tidewater Community College with encouragement from his family.

“I noticed right away that I was not the same cognitively. It was sometimes hard to find words and I struggled to stay focused and seated in class,” he said. “And using technology for virtual learning added an additional strain.”

Sylvester persevered with the help of Gabrielle Pennington, an educational accessibility counselor with the college. “I can’t say enough about Ms. Pennington. She really cared about my success and is one of the reasons I kept pushing.”

He also found a family at TCC’s Portsmouth Campus. Sylvester sends a special shout out to the Open Door program staff who taught him how to balance life, work and school. Open Door offers free academic, career and cultural counseling to low-income, first-time college students on the Norfolk and Portsmouth campuses.

He also recognizes the impact of Dean Dana Hathorn and Lynette Hauser, a favorite professor. “Both of them were caring and helpful. I never had an email or phone call go unnoticed. They were always very responsive,” he said.

Growing up in the projects in Atlantic City, Sylvester says he never thought a college degree was in his future. Now he sees things differently and hopes to make a difference for young men ages 13-45.

“My sister Syliesha Scott was my biggest supporter and she believed in me,” Sylvester said. “You have to have that one person in your corner to help through the rough times. I want to be that person for someone else now.”

Sylvester’s career goal is to work in a service organization that focuses on mental health and to launch his own non-profit one day. To get started, he plans to join Peace of Mind Therapy as a life coach after graduation.

“Some in my situation just didn’t know a better way,” he said. “My motto now is ‘when you know better, you do better.’ A lot of the decisions you think you need to make are not the only option.”

He adds, “You are never too old to get a degree and start a new life. If I can do it, so can the next person. Surround yourself with the right people and make it happen.”