“I tell everyone about TCC and encourage them to just do it. And when it gets challenging, know it’s rewarding in the end.” -- Monika Banks 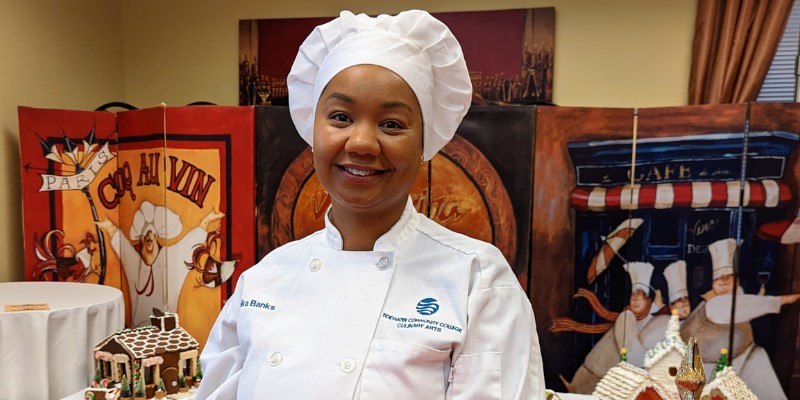 Monika Banks is no stranger to food preparation and management. She comes from a long line of food enthusiasts with her stepfather, mother and grandmother all avid cooks. “I grew up in the kitchen, but I wanted to learn how to do everything the right way,” Monika said.

To acquire additional experience, Monika began working in restaurants when she was a teenager. By age 18, she was the kitchen manager for a well-known eatery in Pittsburgh.

Monika moved to Virginia Beach in 2016 and worked in the hospitality industry but longed to get back to the kitchens. She finally decided to do what she loves and enrolled at TCC in 2019 where she continued to hone her craft.

Fast forward to today, and Monika, 37, just launched her own catering business called Mo’s Unique Taste while earning an Associate of Applied Science in Culinary Arts this December.

The instructors at TCC were Monika’s secret to success. She credits the faculty with building her skills and inspiring her. “It’s been amazing,” Monika said. “All of TCC’s chefs bring something unique and their own style to the program. They also have years in the industry as bakery owners, caterers and chefs. The knowledge they share is priceless.”

She added, “I also learned about the history of cooking, about cultures and food, and also how to apply techniques and prepare different cuisines.”

Monika says her inspiration for cooking is people. “I like to make dishes that people have a taste for, and I enjoy serving and trying new things,” she said. “But most of all I like to see people happy and good food does that!”

Her favorite classes were International Cuisine and American Regional Cuisine. “I made a poached salmon that was really good. I also learned to use different spices and new ways to prepare familiar foods,” she said.

For her final exam for American Regional Cuisine, she made an elaborate charcuterie board. Since then, she has added different boards to her catering menu, including meat and cheese, as well as fruit offerings with a variety of sauces. “These boards are part of every event I cater now, from baby showers to wedding brunches or even retirement parties. They are the perfect pairing for so many things,” Monika said.

Monika has earned three Culinary Arts certificates including Kitchen Management, Classical Cooking and Catering. The certificates build toward the degree and serve as milestones for the program. “I was eager to earn as many certificates as possible as they show you have those specific qualifications,” she said.

Monika is already sharing her skills with her 11-year-old daughter, Raelynn. They spend hours in the kitchen creating special dishes together.

Monika holds a 3.8 GPA and has been on the Dean’s list every semester since she started at TCC. She is also earning an Associate of Arts in Liberal Arts, which she will complete in 2023.

“I tell everyone about TCC and encourage them to just do it. Keep pushing. Don’t rush anything,” she said. “And when it gets challenging, know it’s rewarding in the end.”