The "Get Skilled, Get a Job, Give Back" initiative would be a gamechanger, said President Marcia Conston 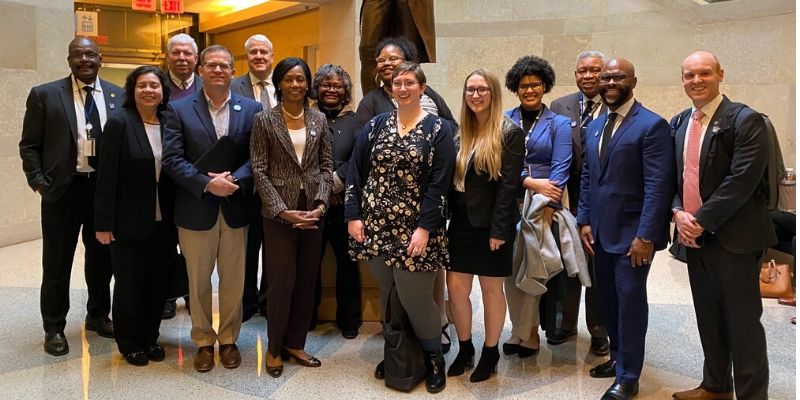 College Board Chair Cindy Free and President Marcia Conston led a contingent of 16 Tidewater Community College representatives to the General Assembly on Jan. 29 to press the case for G3, Gov. Ralph Northam’s signature program to put community college within reach of more Virginians.

G3 stands for “Get Skilled, Get a Job, Give Back.” The governor’s $145 million budget proposal would provide “last-dollar” funding for low- and middle-income students who are eligible for in-state tuition, have applied for federal and state student aid, and are pursuing an education in one of five areas key to the state’s economic development: IT/computer science, health care, public safety, skilled trades and early childhood education.

“If this program is approved by the General Assembly as part of the state budget, it would be a gamechanger,” said President Conston. “We estimate eligible TCC students would number in the thousands.”

Anna Mae Taborn, a student at the Portsmouth Campus, is pursuing an Associate of Applied Science in Information Systems Technology, one of the eligible programs, and she hopes to become a beneficiary. But she said the trip to Richmond benefitted her in another way.

“With the knowledge of the program, I can push it to others who should take advantage of it,” she said.

Aspen Roadcap, a Chesapeake Campus student majoring in liberal arts and business administration, told legislators that she sees her friends struggle with rent and bills while working multiple jobs to pay tuition. “This would help them concentrate on college,” she said.

Meeting with nearly 20 legislators over a few hours, members of the TCC contingent said they encountered little opposition to the budget proposal. “It’s a bipartisan issue,” said Board Chair Free.

The TCC representatives were introduced from the floor of the Senate by Sen. John Cosgrove of Chesapeake, who graduated with an engineering degree from TCC before attending Old Dominion University. “Hopefully my story truly embodies the TCC motto, ‘From Here, Go Anywhere,’ ” he said. He offered a special welcome to President Conston as she takes the helm of “my beloved institution.”

Norfolk Campus student Caroline Conlon said she went to the General Assembly not knowing what to expect. “I was interested to see the process,” she said.

For Norfolk Campus student Shaniqua Hall, “I was so honored to be meeting very important people and having them hear my story. I was happy to be here.”