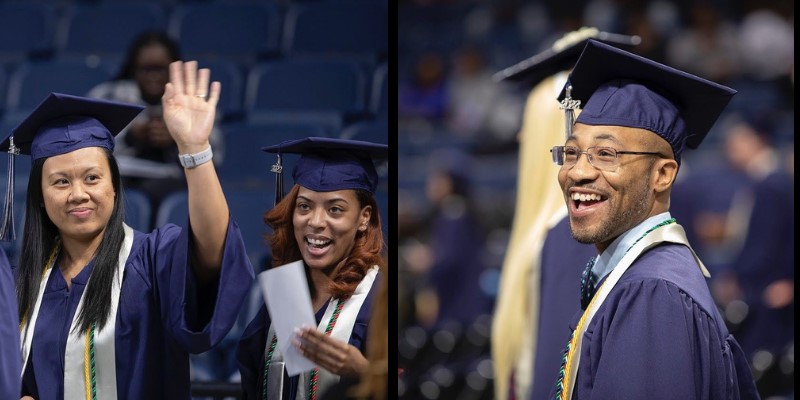 Together they shouted, “I am tenacious and talented. I am committed. I am capable. I am TCC. We are TCC!”  You can see graduates in action here.

With cheers and laughter, graduates prepared to cross the stage as their degrees and certificates were conferred by President Marcia Conston.

The afternoon ceremony was held on Dec. 19 at Chartway Arena on the campus of Old Dominion University with more than 1350 graduates and their families in attendance.

The speaker for the graduates, Harvey Miller III, 22, who completed an Associate of Science in Liberal Arts, has his sights set on the U.S. Senate. He will continue his studies in political science and English at ODU or William and Mary.

Miller found success at TCC after failing at higher education the first time around. He calls himself the “Comeback Kid” and says that his initial failure was the catalyst for his success today.

“I needed to fail so I had a reason to change,” Harvey said. “I started working at a 7-Eleven, relishing the hard work and taquitos, and saving money so I could realize my dream of returning to school.”

Miller said, “I learned our greatest gift in this life is that failure and loss, trials and tribulations are not the end.”

Speaker Delceno Miles dedicated her message as a thank you and tribute to her mother, who was fiercely committed to the success of her children and instilled a love of community in them.

Miles continued by saying, “This is a Commencement so you can commence with your dreams and aspirations. TCC was just a stop along the way to equip you for your destiny.”

At the end of her remarks, Miles presented TCC with a $5,000 donation in support of student scholarships and more.

The ceremony continued as families and friends cheered and snapped photos. Graduates joined a TCC alumni network of 100,000 and counting.

If you missed graduation, you can watch the TCC livestream.