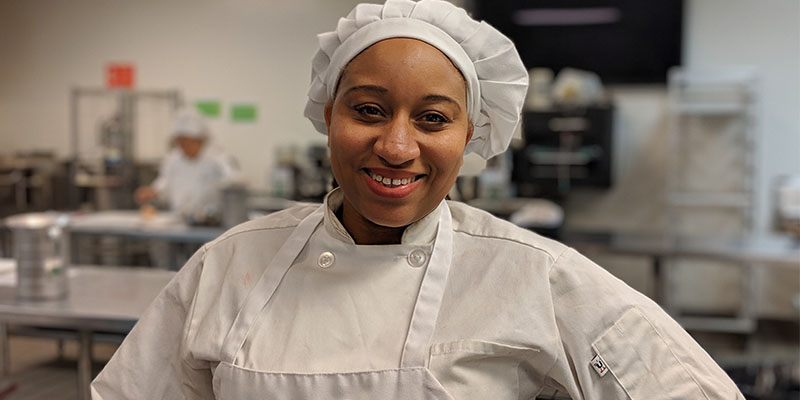 Growing up while her cousins played in the back yard, Tasha Roberts cooked in the kitchen with her mother and grandmothers.

“We always had big Sunday dinners and holiday gatherings,” Roberts said. “By the time I got into high school, I was creating specialty sandwiches and other snacks for my friends. They would rave about everything.”

After high school, Roberts put her love of cooking on the back burner to study nursing. But it didn’t take long for her to end up back in the kitchen. “When I got to my phlebotomy class, I really started rethinking everything. I left school and ended up tending bar to pay bills,” she said. “And every shift, when I should have been behind the bar, my boss would find me in the kitchen talking with the chefs.”

Roberts worked in plenty of restaurants as a host, server and manager. That experience finally gave her the motivation to try culinary school.

Roberts looked into several for-profit schools before selecting TCC’s program, which is accredited by the American Culinary Federation.  She enrolled in 2012 and spent the next three years studying for her Associate of Applied Science in Culinary Arts, which she earned in 2015. She completed her bachelor’s in business from Old Dominion University in 2017.

Roberts recalls being totally unprepared for culinary school, even though she came to that first class with a swagger.

“I found out that I didn’t even know how to boil an egg properly,” she said with a laugh. “The program definitely prepares you for the fast-paced world of culinary arts.”

Roberts’ favorite class was “Garde Manger” under chef Deanna Freridge because of the difficult recipes and the various sauces she learned to prepare. She also enjoyed the end-of-semester banquet where students showcased their special dishes.

Baking challenged her the most.  “There was a moment in this class when I had to decide if this was what I was going to do. Was I going to follow the recipe and execute it properly, or was I going to give up?” 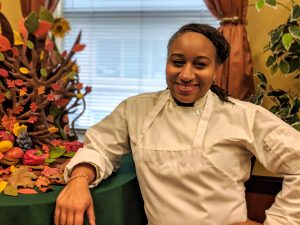 Roberts completed her externship hours in the Norfolk Student Center Café. After graduation, she worked as a chef at Founders Inn. She later served as executive chef at Jewish Community Center in Virginia Beach.

Today, Roberts owns and operates Bonjou, a catering, private chef and pop-up food kiosk featuring her speciality, Cajun-Creole food. She serves up healthy portions of Southern favorites from gumbo to jambalaya to shrimp boils and more. She also works under chef Jacoby Ponder in the Norfolk Kitchen Lab.

“I absolutely love what I’m doing now; I’m finally where I belong,” she said. “While my business is thriving, I still have my eye on a food truck in the future.”

Roberts encourages aspiring chefs to pay attention in every class. “You’re going to need both the basics and advanced skills you’ll hone in the program. And get into the kitchen and shadow some chefs. Be sure this really is your passion, because that’s what will make the difference when you go to perfect your craft.”

Roberts’ favorite time of year is Thanksgiving. She shares some of her prized recipes below.

Refrigerate and allow the turkey to marinade for 4 -6 hours or even overnight.

**** NOTE: Only do this outside on concrete with plenty of ventilation
In a 30-quart (tall not squat) stock pot and a propane burner, with a good regulator, bring the peanut oil to 325F. Use the stainless steel basket to hold the turkey OR use only 100 percent cotton twine to tie the legs of the turkey and lower the turkey VERY slowly into the oil. Ensure that the oil does not bubble over the sides of the pot. If it does, remove the turkey immediately and turn off the burner before a grease fire erupts.

In a medium-sized bowl, combine 1½ cups cheese and macaroni; sprinkle into pie plate.

Place remaining ingredients minus remaining ¼ cup cheese in a blender jar. Blend until smooth, about 15 seconds on high speed (or 1 minute in a large bowl with a hand mixer).

Pour into pie plate. Bake about 40 minutes, or until a knife inserted in center comes out clean.

Sprinkle with remaining ¼ cup cheese. Bake an additional 1 to 2 minutes, until cheese is melted.

Cool 10 minutes then cut into wedges.

Bring to a simmer over high heat. Lower heat, cover and simmer, stirring occasionally, until potatoes are tender, about 20 minutes.

Strain the potatoes out of the sauce and place in a casserole dish.

Return the sauce to the pan. Add the rum to the sauce and continue to cook until syrup is thickened, about 15 minutes. Pour the syrup over the potatoes.

Add the pieces of butter and the marshmallows (as many as you like).

Place in the oven. Bake until the marshmallows are browned, about 10-15 minutes. Remove from the heat and serve immediately.

Prepare an 8×8 or 9×9 baking dish by lining it with parchment paper and spraying well with a nonstick cooking spray.

Place all of the bread pieces into the baking dish.

Pour the melted butter over the bread.

Stir in pecans. Pour evenly over the bread pieces. Use a rubber spatula to push and “prod” the bread pieces around in the dish until all are coated in the syrupy mixture.

Bake at 375 degrees for 45 minutes. Serve warm with a dollop of whipped cream!