His “somewhere” was TCC. Now this first-generation grad can go anywhere

“I truly appreciate TCC and that staff that helped me grow into a person I never knew I was.” -- Taariq Brown 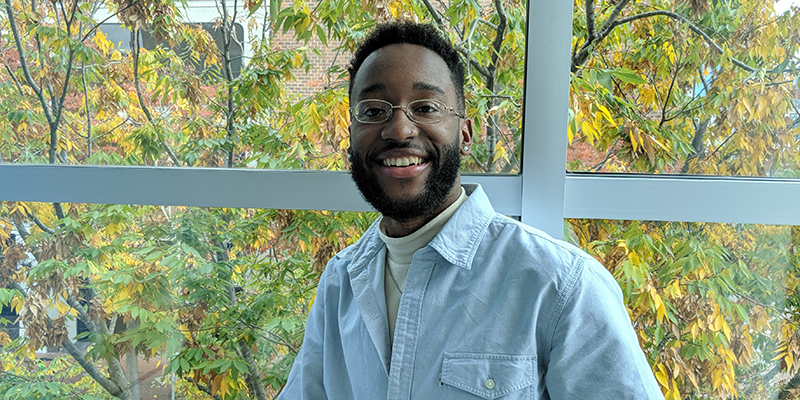 Lack of finances cost South Norfolk’s Taariq Brown his first shot at a college degree and left him depressed.

Today, he’s a first-generation college graduate on the Dean’s List with a plan to transfer to Old Dominion University in January. He’s also an author at work on a second book and a mentor to young boys desperate for the direction he found at Tidewater Community College.

The oldest of nine children will walk the stage on Dec. 16, at TCC’s 69th Commencement Exercises at Chartway Arena in the Ted Constant Convocation Center.

“I gave up on life and thought life gave up on me,” said Brown, who will receive an Associate of Science in General Studies. “Something came over me and told me this isn’t the life you should want, and it’s definitely not the life you deserve.  I had to start somewhere.

“That somewhere was TCC.”

Brown, 21, credits his mother, Kiba, for not allowing him to fall into a rough crowd as a youngster. Many of his peers weren’t so lucky, but she valued education, and in turn, so did he. After graduating from Oscar Smith High, he attended Virginia Wesleyan University, but financial aid didn’t cover all his costs.

Brown quit. Without school or work to occupy him, he became aimless.

That’s when he discovered all TCC has to offer.

Connecting with the Open Door Project, a federally-funded program that helps first-generation college students, gave Brown the assurance that he could complete what he started. It also incentivized him to become more involved in campus life. He’s worked two jobs with a full academic load and will finish with a 3.2 GPA.

As a mentor at a local Boys and Girls Club, he assists children with their homework and teaches a “passport to manhood” class for young boys. Recently, he was accepted into a national mentoring partnership, which will allow him to receive further training to help at-risk youth.

Brown has also been a work-study student in TCC’s advising office, where he is quick to share his personal story to inspire others. “Taariq is a stellar employee and encourages students as they walk through our doors every day,” said Meredith Pollard, the lead counselor on Norfolk Campus.

He self-published a book on poetry and is following that up with a second title.

Brown will study psychology at Old Dominion. He would like to counsel others who find themselves navigating a difficult path after high school. Eventually, he plans to start a nonprofit for sexually abused men.

“Many open doors are coming to me in the new year, and I have to go through to get there,” he said. “I truly appreciate TCC and that staff that helped me grow into a person I never knew I was.”