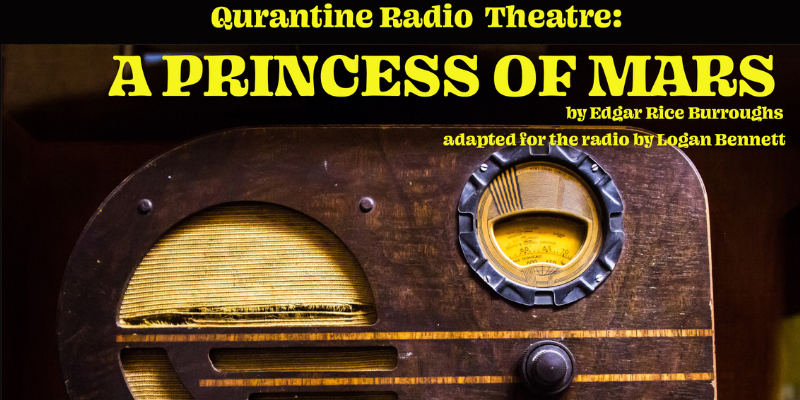 Tidewater Community College presents Quarantine Radio Theatre: “A Princess of Mars” on April 16 for two shows at 7 p.m. and 9 p.m.

The performance is free and open to the public and will be streamed via Facebook on the TCC Theatre Livestreams page.

“The virtual radio format gives us an unlimited canvas with which to tell the types of stories we usually couldn’t,” said director Logan Bennett. “I think it will be something new and exciting that the audience will not be expecting.”

The live radio play will be performed in the Black Box Theater on the Chesapeake Campus. The approximate running time is 85 minutes.

“A Princess of Mars” tells the tale of John Carter, a civil war veteran mysteriously transported to the planet Mars. On this dying, warlike planet he meets a bevy of bizarre creatures, falls in love with a beautiful princess, fights in epic battles, and sacrifices all to save the planet from final annihilation. This swashbuckling adventure, written by Edgar Rice Burroughs in 1912, showcases Carter, the original superhero that inspired Superman, Star Wars, Flash Gordon, and Avatar.

“While we miss performing for a live audience, we see benefits to the radio format as actors learn to convey all the information and physicality through voice alone,” added Bennett. “The audience isn’t limited by a single set or lighting design. They fill in the world with their own imagination. They become an active collaborator in the story. It will be a unique and individual experience, and that can be difficult to achieve in a normal live performance.”

For more information about the play or TCC Theatre, email Assistant Professor Matt Gorris at mgorris@tcc.edu.