Surf’s up for TCC student

"There have been no surprises at TCC. Online learning works for me, and the professors have been really great." -- Rachel Wilson 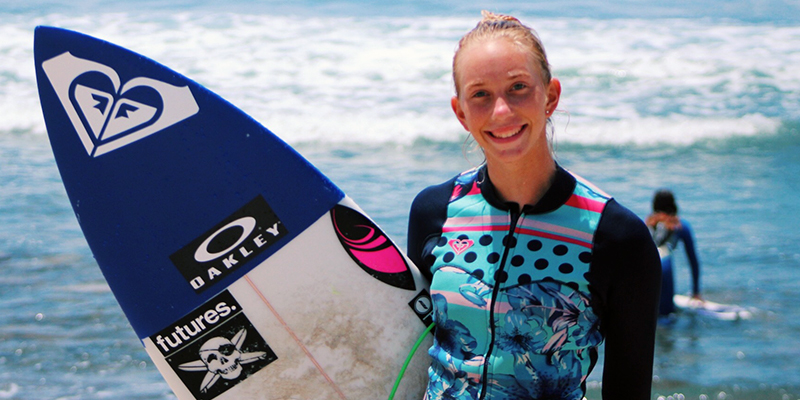 At 17, she’s a pro surfer, but she’s also a college student. Wilson is getting a head start on a degree with dual enrollment courses at Tidewater Community College.

The Virginia Beach native began taking dual enrollment courses at TCC last fall.  When she finishes high school in December, she will have nearly two semesters of college completed.

Online courses allow the homeschooled high school senior to travel to wherever the World Surf League Qualifying Series takes her.

“There have been no surprises at TCC. Online learning works for me, and the professors have been really great,” Wilson said. “It’s beneficial having deadlines and a schedule.”

Dubbed the “Giant Killer,” Wilson became the first female to qualify for the finals at the East Coast Surfing Championships last month in Virginia Beach. While the pandemic shut down competitions for a time, Wilson is stoked to be back on her board.

“I missed competing so much,” Wilson said. “I love free surfing, but competing is my favorite thing to do. I love getting to travel and compete against awesome people who push you to get better.”

Wilson, who regularly surfs at the First Street jetty, has set her sights on the World Tour, where she hopes to compete against the top 17 women in the world. “It’s super difficult to compete at that level, but with training and good coaches, I’m hoping to make it,” she said.

Wilson, who has earned all A’s in college, plans to pursue an associate in nursing at TCC.

“My sister-in-law is a nurse who came through the program. She inspired me to follow in her footsteps,” she said.

Before the pandemic, Wilson volunteered at Sentara Norfolk General, an experience that confirmed her passion for field.

“My mom had some health problems, and I saw her getting care,” she said. “I’d like to be on the frontlines and also have a career where I can support myself.”

Wilson is the youngest of four and the third sibling in her family to study at TCC. “For me, TCC has been a seamless transition,” Wilson said. “And while I’m not getting the social aspects of college right now, I’m learning and working hard. That’s what is most important to me.”