Two TCC teams were among the student groups nationwide to work on science payloads for a NASA rocket launching June 23. 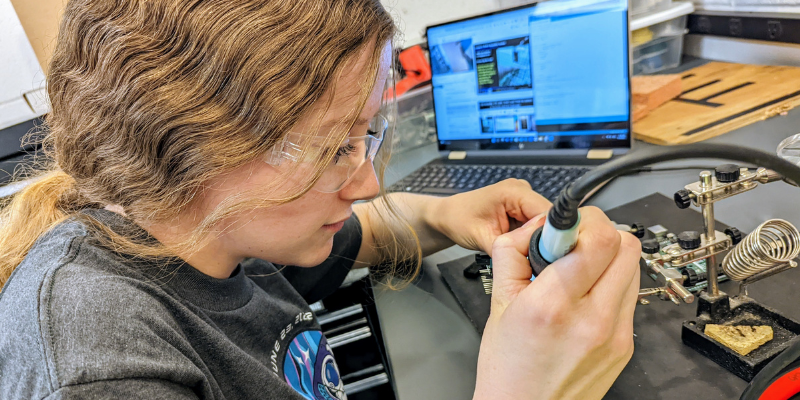 The excitement is building for Tidewater Community College Engineering students who are now legitimate rocket scientists.

As participants in the NASA RockOn! program they will watch their science projects launch into space on June 23.

The RockOn! program is designed for students to learn and apply skills in building experiments for suborbital space flight. Student teams from across the nation participate in the program.

TCC’s student teams are from the Engineering Club on the Virginia Beach Campus and STEM Club on Chesapeake Campus. A total of thirteen students spent weekends and after-school hours working on science payloads for a suborbital rocket out of Wallops Flight Facility in Virginia.

Led by student Nina Vahadi, TCC’s projects were funded by the Colorado Space Grant Consortium and the college. Specialized support was provided by faculty advisor Michael Pastor, an Engineering professor at the Virginia Beach Campus.

“We built kits 34 and 36, science payloads that will measure a lot of things in space. We’ve literally been doing rocket science at a community college,” Vahadi said.

Students received the kits and then built the payloads as a sort of competition between the two teams. “We received a box of parts and through Zoom meetings and clinics with NASA, we worked as teams to complete our payloads,” Vahadi said. “My favorite part of the project was the teamwork and seeing the project through to the end.”

Engineering student and Navy veteran Brian Ayers enjoyed the project and found it to be a good career builder. “This has been a fantastic opportunity to gain hands-on experience. I learned to solder and code and gained new skills,” he said.

Phillip Le, a Mechanical Engineering Technology student added, “The pandemic kept us from doing projects together and with this program, we got to know each other and use each other’s strengths to complete a project. This has been a rewarding experience.”

Participants in RockOn! receive instruction on the basics required to develop scientific payloads for flight on a suborbital rocket. After learning the basics in RockOn! students may then participate in RockSat-C, where during the school year they design and build a more complicated experiment.

“It’s been really exciting working on a project that will launch into space,” added Rebecca Rflug who hopes to one day be an aeronautical engineer.

Delaney Theilman, a Navy spouse with her sights set on a career in computer and electrical engineering, added, “I liked the electrical components and applying what I’m learning in class. I also enjoy robotics, coding and the circuitry of engineering.”

Vahadi sent a shout-out to Theilman and the rest of the team and said, “We ran into problems and worked together to figure things out. One big win was when Delaney fixed a problem with the shield board. The project stalled until that happened.”

Nine team members traveled to the Wallops Flight Facility to watch the launch on June 23.

If you would like to become a rocket scientist at TCC, contact our Virtual Student Support Team at 757-822-1111.