“You’ve got to know how to read people,” says Sterling Oliver, who graduated in May with her Associate of Applied Science in Funeral Service. “Eighty percent of this job is dealing with people and dealing with them at their lowest point.” 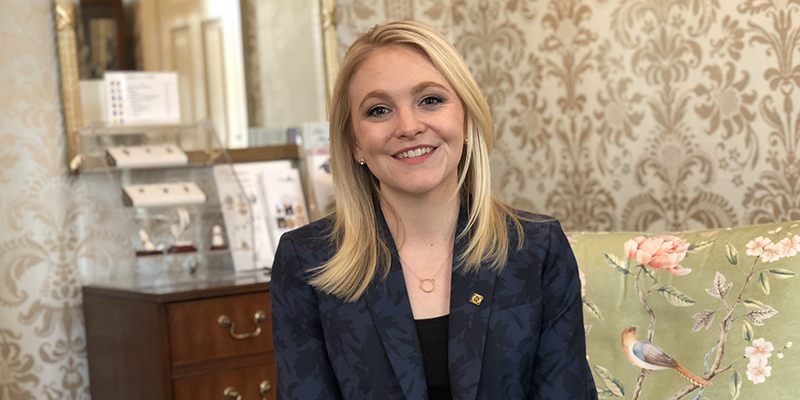 Sterling Oliver is accustomed to the surprise she is frequently met with when she walks into a room where a family is grieving. The 26-year-old, named for her great, great grandfather, the founder of H.D. Oliver Funeral Apartments, does not fit the stereotypical image of a funeral director.

But her education, which includes earning an Associate of Applied Science in Funeral Service from Tidewater Community College, along with her genuine warmth make her more than capable of handling the plethora of details that accompany the loss of a loved one.

“You think you’re doing such a minute thing, but you can be making a huge difference to someone,” said Oliver, seated in the parlor of H.D. Oliver Funeral Apartments in Ghent. “Growing up, I loved event planning – taking complete chaos of what life is and at least making some kind of good out of it. It’s really about service and that individual person sitting in that room and what they need in that moment.”

Sterling is the daughter of Martin Oliver, owner of the family business that also includes Chesapeake and Virginia Beach locations. The company dates back to 1865, when the original Sterling T. Oliver built caskets during the Civil War. Five generations later, Sterling is immersed in what will one day be a business she and her cousin, HD, will run together.

Funeral service is a career she was born into having watched her father keep irregular hours to service a family in need. Neither parent pushed her to follow the path – “In fact, they insisted I go to college first,” said the Maury High School graduate.

Oliver earned her bachelor’s in communication with a specialization in event planning and minor in anthropology from Longwood University. She values the communication skills she gained there, as funeral service is not about working with dead bodies.

“You’ve got to know how to read people,” she said. “Eighty percent of this job is dealing with people and dealing with them at their lowest point.”

After Longwood, TCC became the next step. She considered following her father’s path and attending the nationally renowned Gupton-Jones College of Funeral Service in Atlanta but found an equivalent program at TCC at more than half the cost.

“It was more cost effective; I didn’t have to pay to live in Georgia. I could stay here,” said Oliver, who owns a house in Larchmont. “TCC started as convenience, and it ended up being a better plan.”

TCC’s 67-credit program combines technical education with business skills under the direction of program head Frank Walton, a funeral service practitioner for more than 25 years, and Kim Jones, associate professor of funeral service who specializes in teaching the sciences.

Having come from a small liberal arts college that was close knit, Oliver didn’t expect the same at TCC given its size. “I was prepared to have this impersonal experience, but I was proved wrong,” she said.

Walton and Jones remain mentors who impressed her with lively class discussion and quick responses to all her questions.

“Sterling’s outstanding personality and humble demeanor made her a favorite among both faculty and students during her time at TCC,” Walton said. “She is empathic, extremely bright and as such, well-poised to contribute to the rich tradition of her family’s firm.”

Last May Oliver graduated and is finishing up her apprenticeship, the final step in the program. She will take her state certification exam this summer to be a licensed funeral director.

Oliver would like to see more women consider a funeral service career. She works under TCC alumna Angela Gagne, the first female funeral director in H.D. Oliver history. What used to be a male-dominated industry has increasingly tilted toward women. While only 16 percent of all National Funeral Directors Association members are women, today, nearly 60 percent of mortuary science students are female.

“If you’re good at this, it’s a good income for you and your family. But it takes work, your heart and time. It’s not about driving the big Cadillac or wearing a suit. It’s about raw family emotion and they need you. And they might need you at 2 a.m. You never are going to fix the pain they have, but you can soften the blow.”