Navy veteran on the road to success with cyber security degree

“TCC fit my work schedule. The flexibility of the classes and the adult learners in class with me at night made it an excellent experience.” — Shawn Goodwin 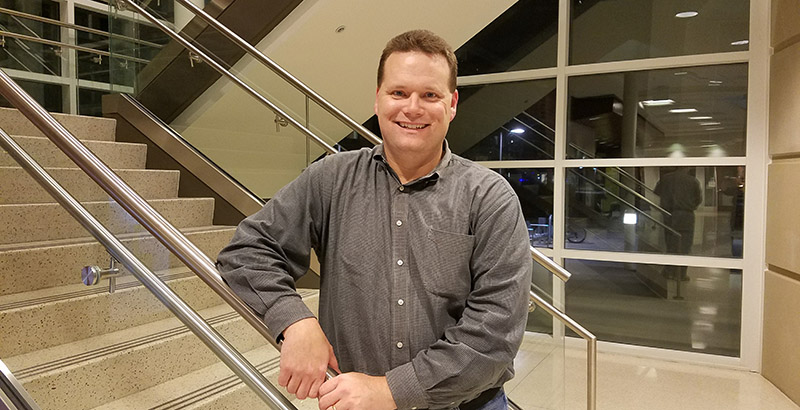 When Navy veteran Shawn Goodwin retires from his 9-to-5 job in 13 years, he and wife Karen plan to hit the open road in their RV to see small-town America. “We want to travel all over the U.S. and see landmarks, beaches, mountains, streams and everything but the big cities,” he said.

Thanks to earning his associate degree from Tidewater Community College in December, he’ll have the income to support his travels. His Associate of Science in Information Systems Technology with a concentration in Cyber Security will enable him to do cybersecurity work while he’s on the go.

“I see myself working sporadically during the day as required, to keep an income stream with enough to fund our adventures,” he said.

A self-described computer nerd, Goodwin, 42, was a Senior Chief electronics technician when he retired from the Navy. He served 20 years and completed tours around the globe and a stint in Antarctica supporting the National Science Foundation.

“That was my favorite tour!” he said. “I provided tech support for the portable and high-frequency radios used to communicate around the continent.”

After the military, Goodwin found work as an information technology program manager for Navy contractors. He enrolled at TCC because of the quality of the cyber security program with its designation as a National Center of Academic Excellence in Cyber Defense by the National Security Agency.

“TCC fit my work schedule,” he said. “The flexibility of the classes and the adult learners in class with me at night made it an excellent experience.”

Goodwin meshed well with his cyber professors, particularly Rob Guess, director of cyber security, who he calls a super nerd. “I’m about his age, and I just get him. He’s extremely smart and knows his stuff.”

The father of three children, Goodwin is encouraging his youngest to enroll at TCC. “I see kids struggling with classes and I encourage them to keep their minds on their studies.”