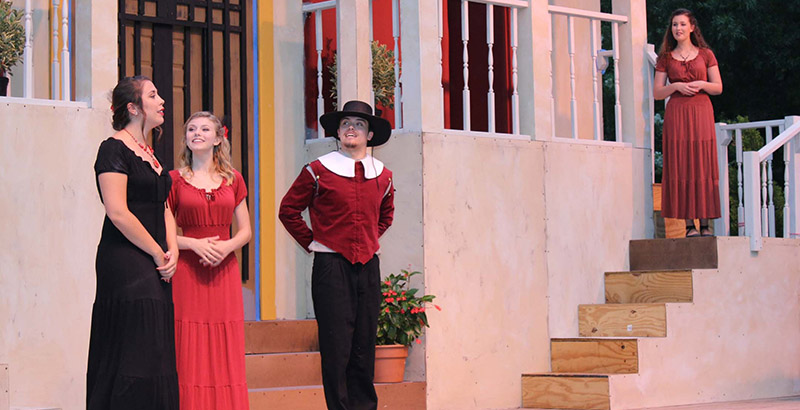 We’re taking a peek inside the classroom to offer students a sampling of what they might experience. This week we visited a dress rehearsal for TCC Theatre’s Shakespeare in the Grove production of “Much Ado About Nothing,” debuting on June 21 at the Grove Theatre on the Chesapeake Campus.

Why this class sizzles:

“The people. It wouldn’t happen if it wasn’t for the people who share their time to prepare for each show. They come back year after year and take part in something that’s been going on for 21 years. Shakespeare in the Grove is really the only performing arts venue in Chesapeake. Some nights we get 1,000 people at the Grove Theatre.” – Matthew Gorris, assistant professor of theatre arts

For those seeking an acting role, it’s important to brush up on your knowledge of Shakespeare’s plays to get comfortable with the language.

“I got involved in Shakespeare in the Grove about seven years ago. I was inspired to join because someone recommended it to me. I use acting as an outlet to show the world that Shakespeare is not scary, but very entertaining and applicable to life still even though it was written in the 1500 and 1600s.” – Kat Parker-Smith, lead actress in “Much Ado About Nothing” and English teacher at Bishop Sullivan Catholic High School

“I always wanted to try acting, so I took the course as a humanities elective during my time at TCC. I was 30 at the time. I got sucked in from the first show and stuck with it every year. My favorite part is definitely the rehearsal process and finding something new to do with a character. I like to bring a little bit of realism to my characters, too, so they can still engage a modern audience.” – TCC alumnus Ed Palmer, lead actor in “Much Ado About Nothing”

“Much Ado About Nothing” focuses on the courtship and scandal involving young Hero and her suitor, Claudio, and features a witty war of words between Claudio’s friend, Benedick, and Hero’s cousin, Beatrice.

Shakespeare set his play in Sicily, but TCC’s production takes the audience to Spain, with brightly colored Flamenco-inspired costumes and sets.