“TCC was an affordable way to figure out what I wanted to do,” said Salvija Hofheimer. “You take classes at your own pace. You’re not forced into a set schedule." 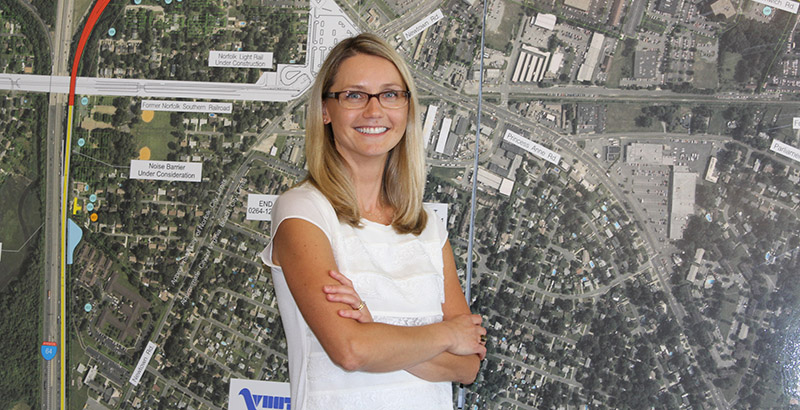 Engineering wasn’t on Salvija Hofheimer’s radar when she started at Tidewater Community College.

Why would it be?

She dreaded math. “I think I started at the second lowest math level you could start with,” she said.

But she didn’t just learn math and science at TCC; she excelled in both.

“The chemistry class I took at TCC was the most difficult class of my life,” she recalled, but, “You know what? I aced it. I thought, ‘If I can do that, I can do anything.’”

Consider engineering, Professor Paul Gordy encouraged. Hofheimer hedged. But she credits the small class size and accessible professors at TCC with giving her the confidence to go for it.

“TCC was an affordable way to figure out what I wanted to do,” said Hofheimer. “You take classes at your own pace. You’re not forced into a set schedule. You don’t have the monetary pressure weighing on that you might find out of a larger school.”

She worked full time waiting tables while juggling classes mainly at night with a core group of students that became friends.

“So much camaraderie at TCC,” she said. “In that setting, you couldn’t help but learn.”

Today, Hofheimer is a project manager at the Virginia Department of Transportation (VDOT), where she’s knee deep in delivering the I-64/I-264 interchange improvements project.

A civil engineer, she earned her Associate of Science in Engineering at TCC in 2004. She then transferred to Old Dominion University (ODU) to complete her bachelor’s in engineering. Engineering was the perfect career choice for her, she said, and she encourages others, particularly women, to consider it, too.

“When I got into the field, it was mostly male,” she said. “I was the only female in my graduating class at TCC and ODU. Over the years, I’ve seen more and more women in engineering.”

Hofheimer is excited by the college’s recent announcement of the TCC Women’s Center STEM Promise Program, which will award 30 scholarships annually to qualifying high school students planning to pursue careers in science, technology, engineering or math.

She is a founding member and a former chapter president, currently serving as a scholarship committee chair for the Hampton Roads Chapter of Women in Transportation, a professional organization dedicated to the professional advancement of women in transportation.

“We’ve had a scholarship recipient from TCC” said Hofheimer, who enjoys sharing with students about all the possibilities open to them in engineering.

“It’s problem solving every day,” she said. “That’s my favorite part of it. It’s never the same day. Every day I have a goal and a to-do list, and it never goes as planned. You just figure things out from morning till evening.

“I love what I do,” she said. “Even if you change your mind after two years, the basic knowledge you learn at TCC by taking these analytical classes will help you anywhere.”