Featured works are by TCC’s Ryan Muldowney; his father, Charles; and siblings Jacob and Shushana 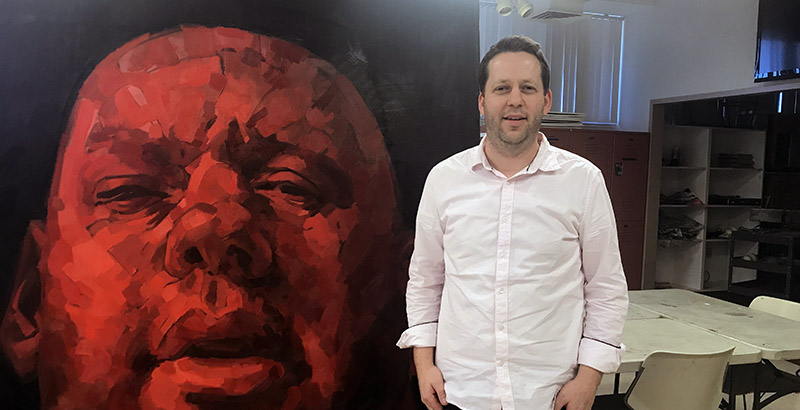 Talk to Ryan Muldowney about art, and you’re in for a rich conversation.

Those spring flowers in the vase that look so brilliant on the canvas? While pretty, calling them art might be a stretch, at least to this self-described artistic omnivore.

“The process of art involves more than the mere representation or replication of a subject, no matter how well it is done,” said the Tidewater Community College professor. “Art arises largely from the ways in which the work parts company with the subject, and how the act of ‘making’ interrupts the illusion created by the subject.”

You’ll see his eclectic works on display at the Visual Arts Center (VAC), host to “Generations: Influences of the Pennsylvania Academy.” The exhibition, which continues through March 7, features works by Muldowney; his father, Charles; and siblings Shushana and Jacob.

“We are a family of artists,” said Muldowney, second oldest among 11 brothers and sisters. He grew up first watching and later creating art alongside his dad, a Pennsylvania Academy of Fine Arts instructor. Like many in his family, Ryan earned his master’s of fine arts there.

While his training at the Pennsylvania Academy was steeped in traditional approaches to art-making, Muldowney is as diverse as his course load at TCC.

Depending on the semester, he might be teaching any of the painting or drawing classes; he’s taught graphic and the portfolio capstone class and he particularly enjoys introducing students to printmaking. The ancient art form is a means of making multiple images, each which can be identifiable and transformational during an evolving process.

“Printmaking is comprised of a conglomeration of different techniques where you create an image on a matrix and you pull prints off of that,” said Muldowney, in his fourth year at TCC after teaching at Sheridan College in Wyoming, Southwest State Minnesota University, Middle Tennessee State and Pennsylvania Academy of Fine Arts, where he occasionally gives workshops. “There’s something about teaching printmaking, the showmanship of it, that makes it almost like a magic trick. It’s very rewarding.”

Printmaking is a small part of his own portfolio, which includes illustration, collage, photography, abstracts, digital images and mixed media. One project is never enough for him; he has several started. Most recently, he has become interested in the patina that appears on old photographs, prints and paintings and sees “new life” arise in these works through this deterioration.  His current work examines ways to simulate the fragmentation and deterioration of an image to increase its visual impact.

“There’s something about decay in terms of creating interruption,” Muldowney said. “There are lots of ways to examine interruption, which a lot of my work is built on right now.”

Often demonstrations that he starts in class evolve into other art forms, as is the case with a number of works that are part of the VAC exhibit.  Over time, he adds layers of paint to create a unique work.

Muldowney encourages students to visit the VAC’s gallery, which he calls “an excellent teaching companion for students.” Excited to teach budding artists no matter their skill level, he takes an individualized approach, understanding that some students are more advanced than others.

Senior citizens regularly audit his classes, which also include students fresh from high school, others in their 20s and some returning to school in pursuit of an Associate of Applied Arts they’ve delayed.

“We have a nice mix in the classroom,” said Muldowney, father of five burgeoning artists himself, ages 1-11.

Check out the Muldowney family work at the VAC. The opening reception will be Jan. 25 at 7 p.m. An informal gallery talk will precede the opening at 6:30 p.m.

The gallery and all events are free and open to the public.