Wishing upon a star didn’t get her to Disney World. TCC did

“I came to TCC with some great work experience, but this degree has been the ticket to a better future.” – Rickkita Taylor 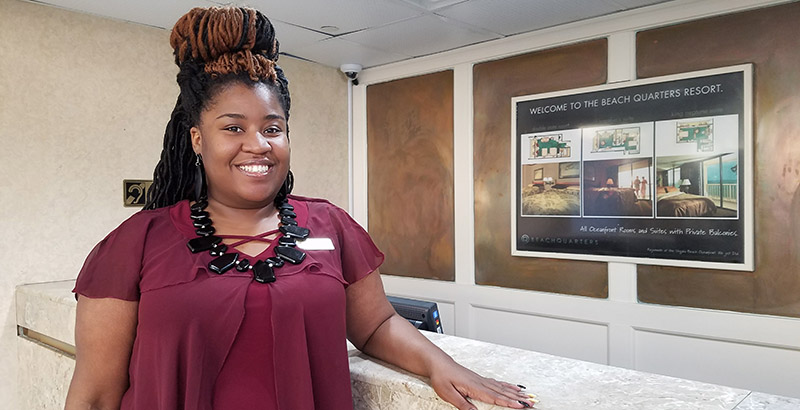 Rickkita Taylor never thought she’d be able to take her two boys to Disney World. But the family recently took that trip of a lifetime.

Thanks to Tidewater Community College, Taylor, 32, now earns twice the pay and can afford to provide vacations as well as all the necessities for her children.

The journey started in 2013 when Taylor was laid off from a retail job and came to TCC to earn her Associate of Science in Business Administration.

She was one of the first to study with the Z-Degree or zero-cost-textbook-free degree. “As a single mom, money was tight, and I couldn’t afford books and tuition,” she said. “Aside from the cost savings, my learning was enhanced because the resources and interactive videos made the material come alive.”

Taylor says she used the Z-Degree savings to pay for on-campus child care and other living expenses.
Rickkita Taylor in her own words

A Virginia Beach native and 2003 graduate of Princess Anne High, Taylor chose TCC because it was close to home and affordable, and she was comfortable attending as an adult student.

At TCC, Taylor connected with the Women’s Center and joined Parents United, which provides support and resources to students who are parents. “As a first-generation college student with lots of obstacles including no funds and limited time, the people there became my biggest cheerleaders,” she said.

While at TCC, Taylor began working as the concierge for Diamond Resorts International, a chain of hotels at the Virginia Beach Oceanfront. One year after earning her degree, she was promoted to in-house marketing supervisor. She now works to hire, recruit, train and develop staff for the hotels.

“My TCC degree definitely helped launch me into this new position,” Taylor said.

Her earning potential has increased thanks to her degree. “I came to TCC with some great work experience, but this degree has been the ticket to a better future,” she said.

“I want my children to know that they can do anything they set their minds to do,” she added. “Never let your circumstances dictate your future.”