The teenagers also revel in an achievement that will allow them to enter four-year colleges as juniors thanks to already earning associate degrees from Tidewater Community College. 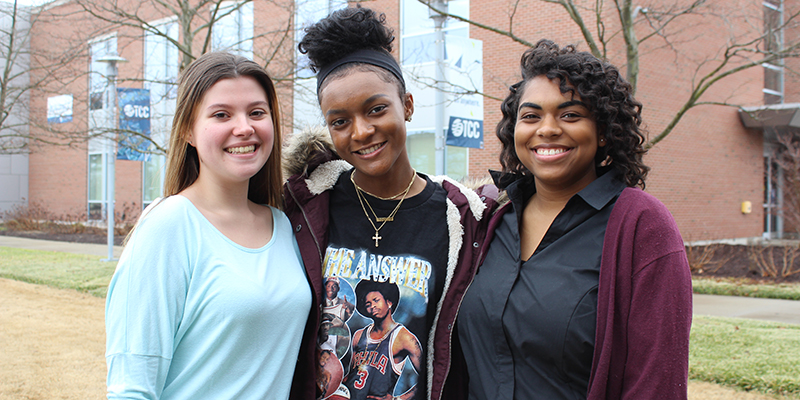 Gabrielle Hutchings, Brandi Porter and Jaylyn Richard trade stories about night classes, chemistry homework and not enough hours in a day to complete everything on their to-do lists.

The teenagers also revel in an achievement that will allow them to enter four-year colleges as juniors thanks to already earning associate degrees from Tidewater Community College.

Norcom High’s Richard is 17; Hutchings and Porter, both from Churchland High, are 18. They will receive the Governor’s Medallion, awarded to those who complete associate degrees by taking part in a dual enrollment program where they earn four semesters of college credit while in high school.

Porter is bound for the University of Virginia, Hutchings, deferred at Princeton, is headed to San Diego State, and Richard will transfer to Old Dominion University. The three will wear their medallions as part of their academic regalia when they graduate from high school in June one month after graduating from TCC on May 12.

“My high school approached me for this and thought I was a really good fit,” said Hutchings, graduating with an Associate of Science in Science and planning to be a dermatologist. “I couldn’t deny that being two years ahead going into a four-year school wasn’t a good fit. This was going to be the hardest pathway I could take, and I know that’s what they’re looking for in college.” 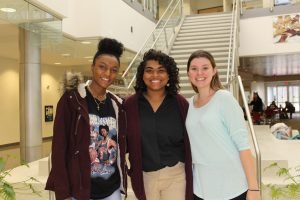 Porter is blunt about her reasons for tackling a load that requires year-round and evening classes. “Saving money,” she said. “I had to think long term. If I didn’t do this, I would have looked back at all the money I could have saved.”

Porter, who will graduate with an Associate of Science in Social Sciences, wants to work at the Pentagon and is considering a public policy major.

Richard had an example to follow in her sister, Johnessa, the college’s inaugural Governor’s Medallion winner in 2015. Jaylyn remembers watching Johnessa grind through her challenging schedule and told herself “not me” at the time.

Then the cost savings hit home as did watching Johnessa shine. “At graduation time, I watched her and thought, ‘This is so amazing. I want to do that.’ ”

Richard was able to combine her load at TCC with playing soccer in high school and being active in DECA and Future Business Leaders of America. She credits improving her time management skills with helping her complete an Associate of Science in Science.

“I write to-do lists out every single week,” said Richard, who has applied to a scholarship program at ODU that would allow her to join the Coast Guard this fall.

All of them tout the diversity of ages they found in the TCC classroom and cherish the mentoring relationships they formed with favorite professors, too many to name.

While they will leave for their next step with an associate in hand, they talk most about the confidence gained from reaching that milestone.

Hutchings admits college in California would have daunted her prior to attending TCC.

“I proved to myself I could do this,” she said. “Getting over all the hurdles and proving that I could be successful in college before having to leave my mom and move across the country is huge.”

Plenty of days, they had doubts, but each persevered.

“You have to tell yourself in the end, it’s going to pay off,” Porter said.

“It’s a lot of sacrificing,” Richard agreed. “You have to learn to forgive yourself and treat yourself. Every time I would pass a big test, I would go to Starbucks.”

Added Hutchings, “You’re not always going to see the light at the end of the tunnel when you do this. There’s a little bit of a leap of faith that has to occur. It’s not for everybody. But it’s definitely worth it if you can do it.”