Justin Seemueller, a respiratory clinical specialist at Norfolk General and 2010 TCC graduate, has also taken a lead role in the design of reusable protective masks for healthcare workers 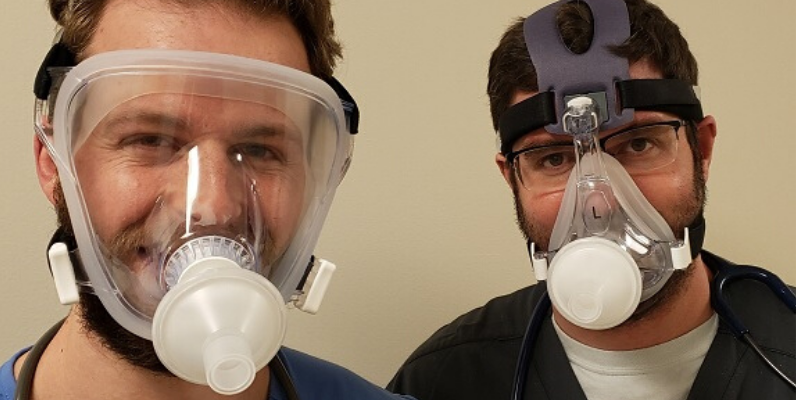 The unique possibilities – a child suffering from an asthma attack to a lung cancer patient gasping for breath – ranged from moderate to life-altering.

As a student in the college’s Respiratory Therapy program, he understood that reacting correctly with a camera recording all of his actions did more than affect his grade. “It prepared me for exactly what I’m doing now,” said Seemueller, a respiratory clinical specialist at Norfolk General Hospital, where 14-hour days are commonplace to battle the COVID-19 pandemic.

“Back then, I thought it was a cruel joke – entering a room and having to respond on camera for a simulation we weren’t prepared for,” said Seemueller, who earned his Associate of Applied Science in Respiratory Therapy from TCC in 2010. “Actually, that was the best part of the program. Instead of being thrown into the wild west of life-saving situations, I have the muscle memory of knowing what to do.”

“Warriors for health. An essential component for patients. A keystone in the COVID-19 battle,” is how Tom Kallstrom, executive director of the American Association of Respiratory Care, describes respiratory therapists, who are on the front lines alongside physicians fighting COVID-19, which attacks the respiratory system and lungs.

Approximately 80 percent of respiratory therapists at Sentara Norfolk graduated from TCC’s nationally accredited program where, almost without exception, all are employed prior to commencement. “TCC puts out the best of the best,” Seemueller said.

Seemueller has an added twist to his role thanks to his engineering aptitude. Collaborating directly with engineers at Old Dominion University, he’s designing a reusable protective mask for healthcare workers. By relying on existing resources, specifically, CPAP masks used to treat sleep apnea, he created design specs for an alternative to the standard N95 masks, which are in short supply nationally.

To be effective, masks must include high-level viral filters and be perfectly sealed, both of which can be accomplished by using an adaptor that a 3D printer can spit out. Those are being printed at ODU and distributed to all Sentara facilities and locally to combat a potential shortage.

“We can equip people with perfect type seal masks that are far superior to what they are using currently,” Seemueller said.

The Kellam High graduate didn’t grow up wanting to be part of a medical team. He found the TCC program after earning a bachelor’s in philosophy from Radford University. He considered law school but found himself instead drawn to a profession that blends technical expertise with medical care.

“I like the marriage of the two,” he said.

He touts the passion of program head Denise Bieszczad – who taught his father, Bob, also a respiratory therapist. “She pours her heart and soul into the program and she could not have prepared me any better,” he said.

“The clinical hours prepare you for what the job is all about,” he said.

Often that means seeing people on the worst day of their lives. “It’s bittersweet sometimes; we’re in a narrow section of the healthcare process,” Seemueller said. “We don’t always know the end result.

“But sometimes you’ll have family members remember you a year or two later and say how helpful you were. When that happens, it means a lot.”