Respiratory therapy grad on the frontlines 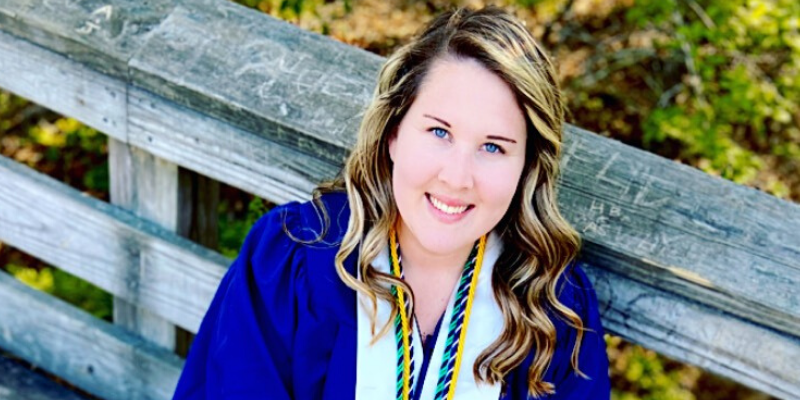 Taylor Moneypenny never imagined starting her career as a respiratory therapist during a pandemic caused by a virus that affects the respiratory system.

But after a circuitous route, the Chesapeake resident, who graduated from Tidewater Community College with an Associate of Applied Science in Respiratory Therapy in May 2020, will start her job at Children’s Hospital of the King’s Daughters (CHKD) confident and prepared.

“I signed up to do this, and I’m ready,” said the honors graduate.

But right now, their primary focus is on helping people recover after contacting COVID-19.

It’s not a field that Moneypenny, a 2014 graduate of Hickory High, initially considered. She prepared for a career in therapeutic recreation by working toward a bachelor’s degree at Old Dominion University when a couple of factors converged.

An internship at Norfolk General gave her a window into respiratory therapy, as did watching her grandmother, diagnosed with small cell lung cancer, receive treatment from a respiratory therapist who graduated from TCC.

The classes were a grind in the competitive program, but a tireless work ethic and support of peers helped her balance the heavy load. She credits program head Denise Bieszczad with making the content relatable. The program boasts a 100 percent pass rate on the credentialing exam.

“When I take practice tests, I’m so well prepared,” Moneypenny said. “Without Denise, we wouldn’t be where we are.”

Clinical rotations at Riverside Regional, CHKD, Sentara Virginia Beach General, Lake Taylor Transitional Care Hospital, Sentara Leigh and Sentara Norfolk General provided real-world experience. Moneypenny spent this semester working as a student aide at CHKD, and she’ll be ready to start in the field initially in a shadowing role until she can take the national exam.

One day she plans to work toward a master’s, but for now, she looks forward to what she calls the best part of the job. Contributing to a patient turning the corner back toward a healthy life, she said, is gratifying.

“You have to have a heart for helping people,” she said. “It’s not an option to say no; you have to be able to help others. You have to be caring. If you don’t have that attitude, this field is not for you.”