One week until the greatest show on earth comes to Chesapeake

Shakespeare in the Grove runs June 26-30 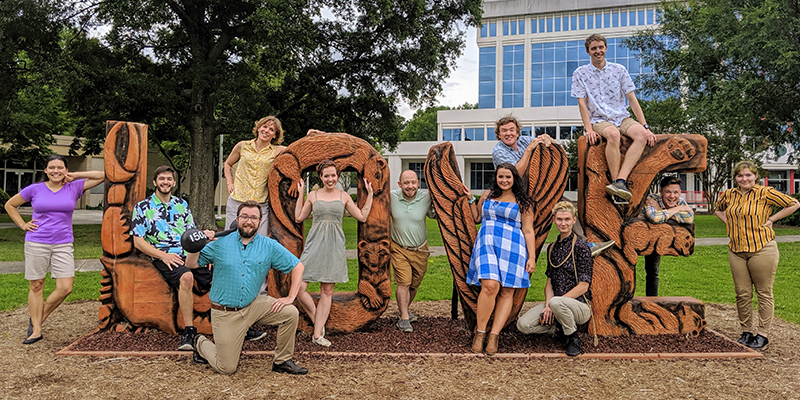 We’re one week away from opening night for Shakespeare in the Grove, featuring “A Midsummer Night’s Dream.”

Called a community treasure, Shakespeare in the Grove presented by Tidewater Community College and the Chesapeake Fine Arts Commission is in its 23rd year.

Join us for free, outdoor public performances from June 26-30, starting at 8 p.m., weather permitting on the “Grove” stage on the Chesapeake Campus, 1428 Cedar Road.

Here’s a behind-the-scenes conversation with the director and some of the actors. 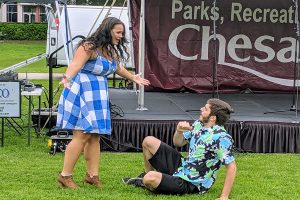 Taylor Durham as Helena with Nick Nauert as Demetrius.

A word from director Trey Clarkson:

“Shakespeare in the Grove is a Chesapeake tradition and the largest production on the Southside. I’m always excited to bring together talented actors from all over the 757 to put on a show in our own backyard. I have been with the ‘Grove’ since the very first show. As we enter the 23rd season we return to ‘Midsummer’ with a big-top circus design. On the heels of the film ‘The Greatest Showman’ and the release of ‘Dumbo,’ as well as the death of Barnum and Bailey in 2017,  the nostalgia of the circus is the perfect setting for the magic and mayhem of this Shakespeare comedy.”

Why should people come to Shakespeare in the Grove?

“It’s fun! It’s free! And it’s a great way to get family, friends and everyone outside, under the stars, for outdoor theater. It really is the greatest show in Chesapeake.” –  Chris Bernhardt, playing Theresa Snout and Wall

How do you make Shakespeare understandable for today’s audience? 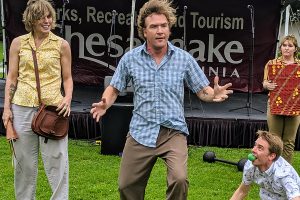 “Mostly, you just have to communicate with people. The language can seem dense at first, but once your ear gets used to it, you can easily understand what’s happening on stage. We also do so much physically, that we could almost do it in mime and you’d still catch on to the show. The quality of the play is what makes this timeless classic still relevant today.” – Logan Bennett, playing Nick Bottom and Pyramus

“Shakespeare really is for everyone. Especially when you look at the universal themes presented, including love and chasing your dreams.” – Sylvie Green, playing Patty Quince

This year’s theme is the circus – why does it work?

“Adapting Shakespeare to different time periods and themes is a common practice, but it’s difficult to do well. Somehow, every year we figure out how to make it work. ‘Midsummer’ seems to fit the circus theme so well with all of the crazy characters, the magical things that happen, with the character changes and people running away to join the circus, it all just makes sense, and you’d think it was the original.”  – Patrick Rostock, playing Francis Flute and Thisbe 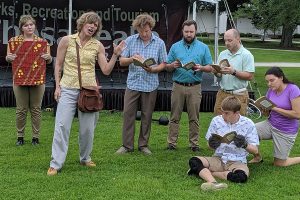 How difficult is it to learn lines?

“It depends on person to person how difficult it is to learn lines. But with this show, it’s a lot of poetry, so it flows really nicely, and I think it’s really easy to remember your part.” – Noëlle Peterson, playing Hermia

On being the tallest man

“This has been the most difficult role I’ve ever played. I’ve had to learn unique skills, like walking on stilts, and it’s been a big learning curve acting while being 10 feet tall! – Tristan Hicks, playing the Tallest Man and Moonshine

“The hardest part is definitely projecting your voice over a very long distance, especially when it’s really humid! And sound interruptions and the weather, of course!” – Andreas Zollos, playing Lysander

What makes Shakespeare in the Grove special? 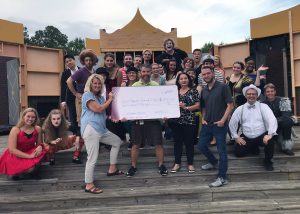 Cast members accept a donation from Terri Anderson (left) with the Hampton Roads Chamber of Commerce.

“This is a really high-quality show. The director and actors and technicians are hard working and good at what they do. We can get away with a pretty short rehearsal schedule because we’re all dedicated and give our all in every rehearsal and performance.” – Sylvie Green

“The professionalism, as far as community theater goes, is top notch. This is the only place I’ve been that they hold you to a professional standard. Every TCC show I’ve been a part of, people are really pushing their limits to put on the best show possible.” – Logan Bennett

The “Grove” stage is under construction on Chesapeake Campus