The TCC Real Estate Foundation’s acquisition will allow for an expansion of the downtown Norfolk Campus and the development of the Patricia and Douglas Perry TCC Center for Visual & Culinary Arts and Hospitality Management. 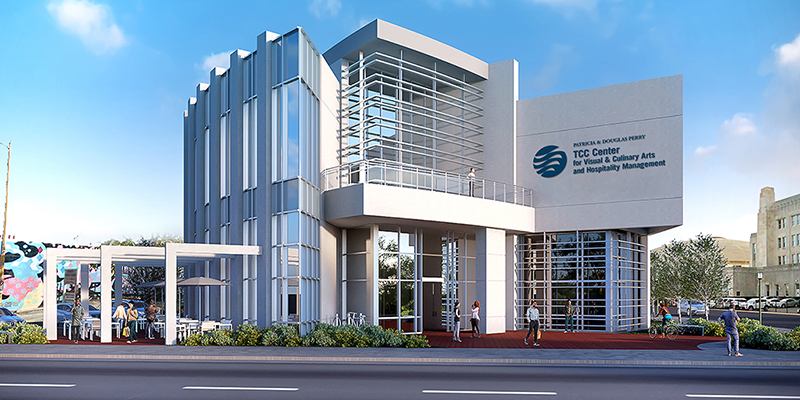 The City of Norfolk took another step Tuesday toward establishing the NEON District as a premier destination when City Council approved Tidewater Community College’s acquisition of the Greyhound station site at 701 Monticello Ave.

“Norfolk is building a global reputation as a destination for the arts,” said Norfolk Mayor Kenneth Cooper Alexander. “This joint venture between the City of Norfolk and Tidewater Community College will bring new opportunities to thousands of students and visitors, while establishing the NEON District as Hampton Roads’ premier area for creative professionals.”

The TCC Real Estate Foundation’s acquisition will allow for an expansion of the downtown Norfolk Campus and the development of the Patricia and Douglas Perry TCC Center for Visual & Culinary Arts and Hospitality Management.

The city will relocate the current Greyhound operation to the Downtown Norfolk Transit Station.

“It is fair to say that the construction of TCC’s Norfolk Campus in the ‘90s brought new energy to downtown,” TCC President Edna V. Baehre-Kolovani said. “And now history will be repeating itself. We are proud to partner with Mayor Alexander and the City of Norfolk to light up the NEON District with this project. As one of the anchors in the NEON District, we will be creating a destination not only for students, but for visitors as well.”

“Through a generous gift from Patricia and Douglas Perry, this new center for visual and culinary arts will not only create new workforce and dual enrollment opportunities for students throughout the region, but will also become a prime dining destination for visitors and tourists,” Mayor Alexander said.

In addition, the Perrys are gifting their Glass Wheel Studio to the college. TCC plans to locate its public gallery and studio arts programs there, while creating vibrant new partnerships with the Chrysler Museum, the Perry Glass Studio, Old Dominion University and Norfolk State University.

Mayor Alexander said the new TCC centers will create opportunities not only for students, but also for Norfolk residents through workforce and dual enrollment programs.

The Perry Center will:

Allow the expansion of TCC’s visual arts programs to include fiber arts, jewelry and papermaking, among others.

Create a student-run restaurant on which culinary and visual arts students will collaborate.

And become the home of a new Restaurant Management program being introduced by TCC this fall.

“This offers a unique opportunity for the next generation of hospitality professionals in what is a fast-growing segment of Norfolk’s economy,” Mayor Alexander said. “Our employers will welcome this program.”

TCC opened its Norfolk Campus in 1997, thanks to a substantial contribution from the City of Norfolk and start-up funding allocated by the General Assembly. It brought new life to former stores like F.W. Woolworth and Smith & Welton, and transformed the old Loew’s theater into the TCC Roper Center for the Performing Arts.