“My parents inspired me when I was younger, and the Navy gave me the opportunity to be a great doctor. And TCC, that’s where the story began.” — Alumna Nehkonti Adams 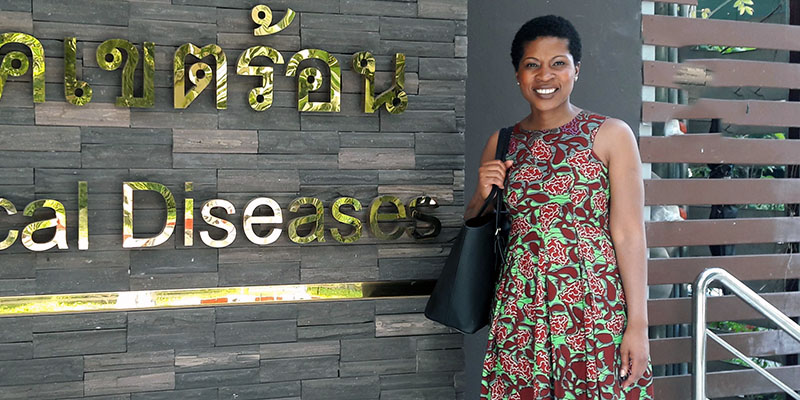 Standing by her bedroom window, Nehkonti Adams didn’t know why.

Later, the 11-year-old realized it was to avoid getting shot due to the civil unrest that had erupted in her home, Monrovia, the capital city of Liberia.

It wasn’t long before a new chapter started for Adams, which included immigrating to the United States with her family and joining the U.S. Navy, where she’s risen to lieutenant commander.  Tidewater Community College played a role, too, for the doctor of infectious disease.

That’s where Adams found the confidence and the academic success in science classes that had eluded her in the past.

“TCC ended up being the springboard for my career,” said Adams, today the Navy’s director of Tropical Medicine in Okinawa, Japan. “In the beginning, I was very insecure about how I would perform in college. I made the right choice in TCC.”

Her family left Liberia for Chicago, home to her paternal grandfather, and Adams spent her teen years in Minnesota. She made an abrupt decision to join the Navy after a recruiter visited her high school cafeteria. At 18, she enlisted, stationed at the Navy’s base in Little Creek and aboard the USS Ashland.

Deployment took the ship to Brazil, and in Rio, she listened to the experiences of a Liberian refugee, an experience that fueled her interest in medicine. “I decided I wanted to work with displaced people and refugees,” she said.

Adams remembers returning to Norfolk and heading for Barnes & Noble, where she visited the college section to leaf through books detailing nursing school requirements. She continued in the Naval reserves and enrolled in classes at the Norfolk Campus, immediately bonding with Professor Fred Farris. He reminded her of her father, a physician and anatomy and physiology college professor.

“In Professor Farris, I saw what people saw in my father,” she said. “He taught biology, and I got an A in his class. He took the time to help us and was so kind.”

Graduating with a 4.0 GPA from TCC with an Associate of Science in Science, Adams transferred to Trinity College in Washington, D.C. Among her closest friends there, another TCC graduate who had also received a scholarship to Trinity.

Because of the support system left over from her TCC days, Adams chose to return to active duty and this area to attend Eastern Virginia Medical School. Infectious disease was an obvious choice given her roots in Liberia.

“Being from Liberia, things like malaria, I knew about even at 10 years old,” said Adams, whose parents ran a family practice clinic there. “And there’s some other parasitic diseases people get there. Because I saw illnesses like that firsthand and because of my love for traveling, infectious disease was a natural fit.”

Adams will live in Japan until the fall of 2021. She provides key policy support working with the Naval hospital there and the Marines. Her recent efforts are focused on COVID-19 and keeping U.S. military personnel safe.

Adams’ native country remains foremost in her mind; she tries to return for two weeks every year to head a field clinic. Adams has traveled to 40 nations and has been in the Navy for 25 years. She regularly speaks on the importance of STEM opportunities for women.

“My parents inspired me when I was younger, and the Navy gave me the opportunity to be a great doctor,” she said. “And TCC, that’s where the story began.”