Jacob Beagle is using his GI Bill benefits to help pay his way through college. Military-related students can contact TCC's Center for Military and Veterans Education for assistance. 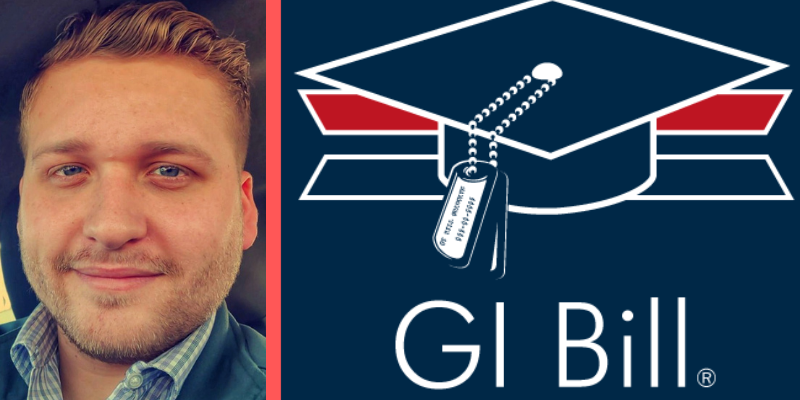 After separating from the Navy in August 2019, the Michigan native who was stationed in Norfolk started college two weeks later at TCC determined to fulfill his lifelong ambition of becoming a doctor.

“It was just so convenient,” he said, noting the process of using his GI Bill benefits to cover his tuition was “quick and seamless” and “user friendly.”

Although fascinated by the sciences, Beagle, 26, admits to not being a strong high school student, though he certainly didn’t struggle with work ethic. At 14 years old, he was employed full time as a busboy, committed to contributing financially to his family.

“Honestly, I grew up in a low socioeconomic status household, and there weren’t a ton of opportunities to go to college,” he said. “I knew that’s essentially how you get out of poverty. I  always knew that I wanted to pursue medicine, and it would not have happened if I didn’t have some sort of catalyst, like, joining the military, where I could get some experience, and then get out and have the GI Bill. That’s essentially priceless for students like me.”

Ultimately, Beagle wants to work in an emergency room, a calling that goes back to his dedication to service. Right now, he balances 15 credits at TCC with full-time work as a clinical assistant.

It’s a heavy load, though manageable with online classes. He originally planned to transfer to Old Dominion University this fall, but after a late acceptance, Beagle found out all the classes he needed were full. That led to his current slate at TCC, where he will finish with 47 credits toward an Associate of Science in Social Sciences.

He’s grateful for the foundation he found at TCC. “Attending orientation and meeting with an advisor are critical for someone like me who hasn’t been to school in a while,” he said. “I was a little bit nervous about it at first.”

Quickly, he became acclimated; having peers like himself helped. One-third of TCC’s enrollment is military-related students.

“We relate to each other on a different level,” he said. “Most of us are older and have been through many of the same things.”

Classes in biology, sociology and anthropology became favorites. He’s gotten to know his professors. He’s used the Writing Center to help with essays and used the resources at the Center for Military and Veterans Education.

Once Beagle completes his bachelor’s in biology at ODU, he will apply to medical school. He hopes to attend EVMS.

“I realized at a young age that to get out of poverty, you couldn’t do a mundane job,” said Beagle, who will be the first in his family to graduate college. “I observed what I saw other people do and knew I needed to emulate that.”

Military-related students can contact the CMVE for help with their GI Bill benefits and other questions. Call (757) 822-1111.