“For someone like me who barely graduated high school, TCC has been my second chance.” -- George Porzig 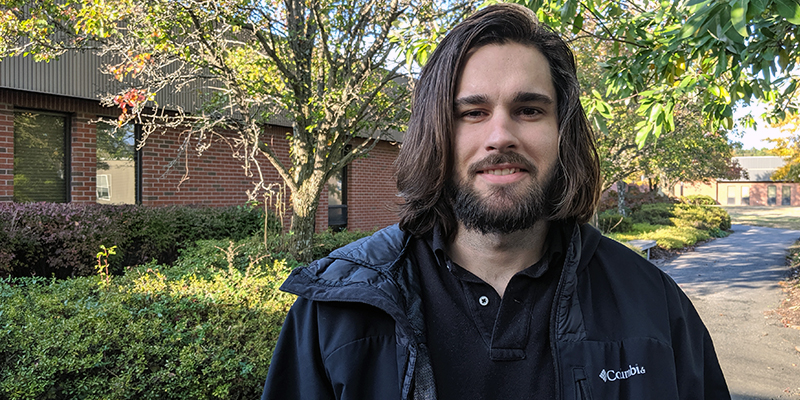 “For someone like me who barely graduated high school, TCC has been my second chance,” he said.

After scraping by in high school, Porzig, 28, came to Tidewater Community College to prepare for a career that includes finding solutions for global poverty.

“I couldn’t think of a realistic situation where academics could help me when I was a kid. That all changed once I was in the Navy and traveling the world,” he said. “I realized the impact of academics – especially economics – on real people.”

Porzig graduates with a 4.0 GPA on Dec. 16 with an Associate of Science in General Studies. From here, he will transfer to the College of William & Mary to study economics.

Prozig spent six years in the Navy, doing a tour aboard the George H.W. Bush. He is using his GI Bill benefits to pay for school and completed his degree in less than two years.

Free moments on his last deployment were spent reading books on economics rather than binging on Netflix.

That sparked his passion for learning and set him on a new course.

“At TCC, I found that as much as I wanted to learn, my teachers wanted to dialogue and really engage me in the subjects they were teaching,” he said. “The faculty’s expertise and their willingness to share their knowledge make this place special.”

Porzig came to TCC because he didn’t have the grades to get into any other school. He stayed for the degree because of the community he found on the Chesapeake Campus.

“If I’m having a bad day, I can’t make it through the Pass Building without someone reaching out,” he said.

Now Porzig is paying it forward as a work-study student in the Cedar Room, the one-stop-shop where new and returning students can receive help. He says technology can be a barrier for admission for some students and he enjoys helping them navigate the process.

Married to Danielle, Porzig credits their son, Aurik, 3, with motivating him.  “I look at him and know that it’s not an option to fail.”

Porzig hopes to advance toward a doctorate and work as a professional academic and researcher.