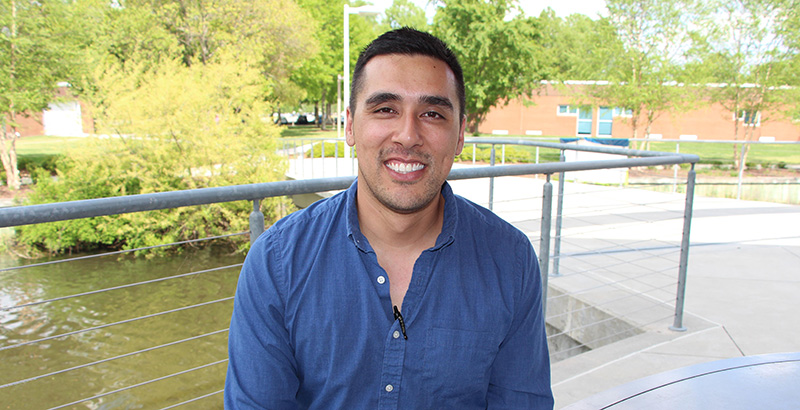 When Nathaniel Gonzales’ assignment for a military contractor ended, he realized he needed to advance his education to advance his career. With support from the Fleet Reserve Association and the Tidewater Community College Educational Foundation, he’s doing just that.

“I decided to go to school, so I could move forward,” said Gonzales, who is pursuing his Associate of Science in General Studies at TCC. “I didn’t need a degree, but I wanted it.”

Unsure of his next steps, Gonzales, 34, enrolled at TCC’s Virginia Beach Campus, where he had taken a few classes as a student at Oscar Smith High School. He could attend classes just minutes from his house and online, even while a demanding new contracting assignment sent him around the country.

A Coast Guard reservist, Gonzales was eligible for GI Bill benefits, but his wife was already using them to attend TCC full time in pursuit of a computer science degree.

“My needs were exceeding my financial aid,” said the father of three. “I knew TCC offered scholarships, so I went ahead and applied.” He created a scholarship account and searched for all the awards he was eligible to receive. “The process was very straightforward,” he said.

And to his surprise, he won.

Gonzales has the distinction of being the first Betty Rogers Wanat Scholarship recipient.

Betty Rogers Wanat was passionate about supporting military men and women. She served as a U.S. Navy cryptologist and, later, as a staff officer with the Armed Forces Security Agency. Her husband, Frank Wanat, was a Pearl Harbor survivor.

Established in 2016 by the Fleet Reserve Association Branch 166, the annual $1,000 scholarship named in her honor is intended to help military-related students pursue higher education at TCC. Recipients are selected based on financial need, academic standing, character and leadership qualities.

“We were so impressed by Nate,” said Sha’ron Martin of the Fleet Reserve Association. “He’s a fantastic, intelligent young man, and it’s been wonderful to see how he’s putting this scholarship to good use on his education. We know he’s got a bright future ahead of him.”

The scholarship has made a difference, Gonzales said.

“This funding has helped fill the gaps from my military aid and allow me to buy my school supplies and books,” he said. “It’s been eye-opening to see how many options there are for paying for my classes if you work hard.”

Gonzales will finish his associate degree this fall and hopes to transfer to a four-year school after that to pursue a bachelor’s degree.

His advice for future scholarship applicants?

“Don’t accept any failure as grounds to give up,” he said. “Keep trying and working hard and you’ll find that your hard work isn’t going unnoticed.”