Artist Olivia Hudson will graduate in December with her Associate of Science in General Studies. 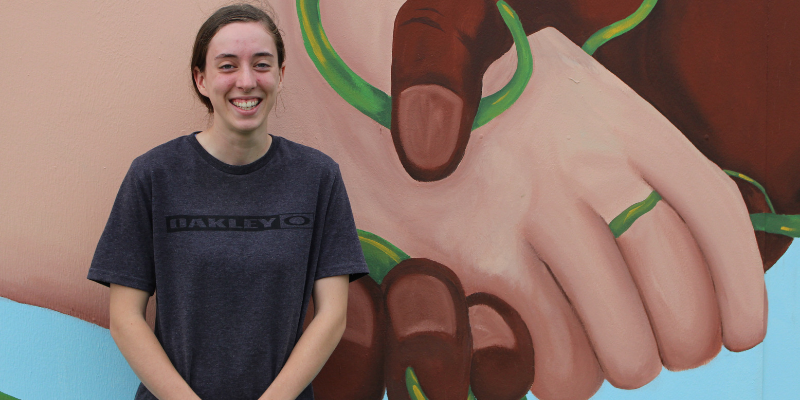 As much as Olivia Hudson enjoys drawing and painting, she rarely shares her work.

“Everything I do is for me to put on a shelf and really never look at again,” says the Virginia Beach 20-year-old, who will graduate from Tidewater Community College in December with an Associate of Science in General Studies.

Drive by Cypress Avenue near 17th Street, though, and you can’t miss Hudson’s artistry – an 8×12 mural with a sky blue background featuring two hands – one of color and the other white – interlocked. Underneath the letters read “Building a Better Community.”

The mural is one of three created by students selected after an open tryout offered by the ViBe Creative District, a Virginia Beach nonprofit, in July. The challenge: to design a mural positively reflecting the community theme, a response to the construction and orange cones littering the Oceanfront that are the result of a number of building projects that will enhance the area when complete.

It’s Hudson’s first mural and the challenge overwhelmed her at times.

“I’ve never painted anything nearly that big before,” she says.

When she arrived in the early morning hours to avoid the heat meant, she had to deal with the dew that dampened her work from the night before. Paint dries quickly outdoors, she realized, and blending skin tones proved challenging.

She chugged Gatorade and put an estimated 30 hours into the mural before the final product satisfied her.

Deciding how to best reflect the theme was easy. “Community for me is just about people and their relationships and helping each other,” she says. “I wanted to do something I thought would speak to people around here.”

The 2017 First Colonial High grad works full time for a company that specializes in making wood furniture and doesn’t anticipate transferring after she earns her associate degree. While completing her degree is an accomplishment she’s proud of, Hudson wants to continue working in carpentry and one day, own her own business.

She doesn’t rule out taking classes at the Visual Arts Center, but admits turning a hobby into a job might dampen the joy. The whole experience creating the mural, she says, turned out better than she expected.