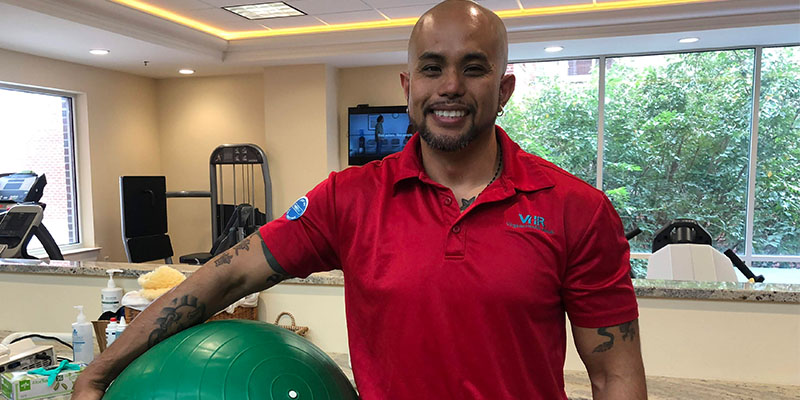 As an occupational therapist assistant, Mike Reyes finds joy in helping patients overcome tasks that most of us take for granted.

Dressing. Bathing. Sometimes even standing up or writing their name.

The Navy veteran who earned his Associate of Applied Science in Occupational Therapist Assistant from Tidewater Community College in 2013 never heard of occupational therapy when he was weighing career options in the health sciences.

Initially, he thought he would study physical therapy.  But a visit to his father in the hospital provided a fresh perspective. After R.C. Reyes had a heart transplant at Sentara Heart Hospital, he gushed about the occupational therapist assistant who helped get him back on his feet. That made an impression on Mike.

“It was great to see him walking down the hallway with an IV all by himself,” he said.

When Mike Reyes was admitted to TCC’s occupational therapist assistant program, he was one of three men in his class, a tightly knit brotherhood, he said, that shares friendship and study tips to succeed in the demanding program that has a retention rate of 97 percent. The three required clinical rotations let him experience firsthand the world he was preparing to join.

“That was the best time to learn,” Reyes said. He completed internships at Atlantic Orthopaedic Specialists and Sentara Therapy Center’s Day Rehab unit.

“You’d see a patient’s eyes light up when their hand starts to move again or when they’re standing again,” he said. “Every day when they’re able to do something they couldn’t do before, their eyes would light up.”

Today Reyes is a full-time occupational therapist assistant at Harbors Edge in Norfolk, a retirement community that includes a skilled nursing floor. He was able to find a job quickly after receiving his associate degree and successfully passing the National Board for Certification in Occupational Therapy.

Reyes regularly works with four to nine patients, all of whom he gets to know well. Sometimes they’re recovering from a stroke or a fall. One particularly rewarding episode involved his working with a diabetic man who lost a leg to amputation. The patient was depressed about a sedentary future.

Reyes helped him adjust to using a prosthetic leg.

“His goal was to run with his grandkids,” Reyes said. “On the day of his discharge, he was walking toward me excitedly, yelling in the hallway, ‘Mike! MikeI I can do it!’ ”

“Watching a person progress – to go from not being able to do anything to taking care of what they used to take care of, living independently again, that’s the reward,” he said. “We work with lawyers, doctors, judges, everyday people here. We provide another steppingstone for the person to go home and do what they love.”