Michael Humphrey-Sewell discovered how much he enjoyed the mix of computers, engineering and business at the college and holds associate degrees in all 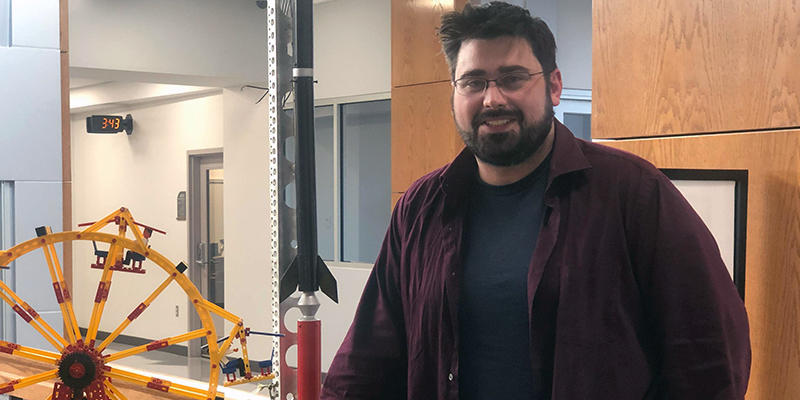 You might say Michael Humphrey-Sewell can’t get enough of Tidewater Community College.

It’s a year later and he’s amassed two more associate degrees. He will graduate on Dec. 16 with associates in engineering and computer science. He’s also earned certifications in CompTIA A+ and Network +.

Humphrey-Sewell, 31, is already at work on his bachelor’s in computer engineering from Old Dominion University, but he’s not done with TCC just yet.  A cybersecurity certificate is also on his TCC bucket list.

“There are just so many useful classes you can take at TCC, and I really like that they’re so hands-on,” he said. “It’s a small environment where you can get to know your professors and they know you. They actually talk to you.”

Working with TCC’s Center for Military and Veterans Education, he has been able to use his GI Bill benefits to pay for his education. “It’s a good deal to come here for free and take classes I like,” he said.

Part of his transition after a nine-year career in the Navy involved developing new skills. He taught acoustic intelligence during his service and liked to tinker with computers. But it wasn’t until he came to TCC that he discovered how well three fields that he enjoys – engineering, business and computer programming – complement each other.

“I really needed to modernize my technology base,” he said. “Modernizing it makes me more marketable. This was a good transition for that. I’m looking to leverage all my old experience with my new.”

Humphrey-Sewell also serves as vice president of TCC’s coding club and secretary of Computers for Student Success. His team finished second at the recent Dominion Hackathon. He’s a regular in the Maker Space inside the Advanced Technology Center, where he’s built websites and his own password manager.

In addition to his academics, Humphrey-Sewell is webmaster of the personalized tutoring and testing center Gruzone Education, where teaches computer fundamentals and math.

Eventually, the single dad plans to make a career as a software developer or security analyst.

The New Hampshire native, who landed at the college after shore duty stationed him in Virginia Beach, is grateful for the foundation he found at TCC.

Three years ago when he left the Navy, “I didn’t know what was out there,” he said. “I wouldn’t know about all the opportunities there are if I hadn’t come here.”