Korinne Maher is grateful for the accounting, marketing, communications and financial management foundation she received from the college. 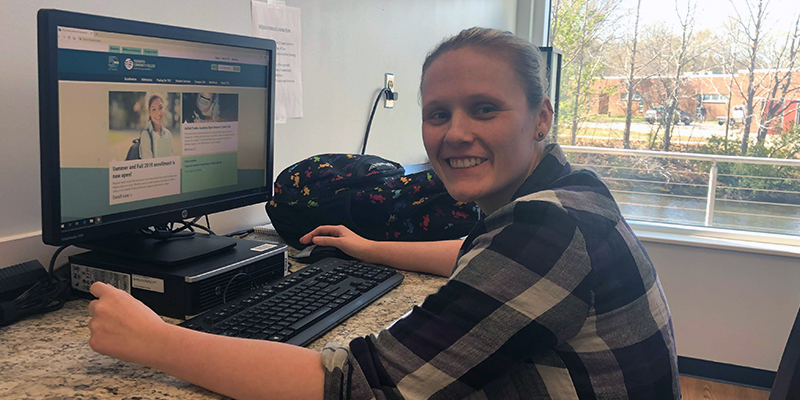 When Korrine Maher enlisted in the Navy at 25, she envisioned a future as a Navy pilot.

One year into her service, the aviation structural mechanic fell 20 feet while maintaining a helicopter. She blacked out on the asphalt, her head slamming the pavement first, and suffered a traumatic brain injury that derailed her plans of a military future.

Six years later, Maher, 32, landed at Tidewater Community College and will graduate on May 13 with an Associate of Applied Science in Management with a Specialization in Small Business Management and Entrepreneurship.

The tools she learned in that program – a mix of accounting, marketing, communications and financial management – all contributed to her launching her own business, Korrine Maher Designs, LLC, which showcases her fine arts background. 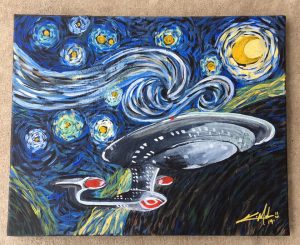 “I always tried to run from the arts, but I realized it was something I was always good at,” said Maher, whose whimsical collection ranges from abstracts to the realistic, including a delightful piece that combines the Star Trek Enterprise with van Gogh’s The Starry Night.

Her long-term goal involves painting the Oceanfront windows with designs of the shopkeeper’s choosing. “I paint the images backward, on the glass, from inside the store,” she said, noting that technique would preserve them from nasty weather and day-to-day grime.

Maher honed artistry by earning an associate in fine arts years ago at a New Jersey community college, but TCC provided the small business tools necessary to translate those tools into a career. The support she found here came at an important time in her life.

She didn’t suffer any bone damage during the accident, but inside, Maher was broken. For the last six years, she navigated doctors’ visits and chronic pain that led to depression and anxiety. She found solace in her four animals: two cats, a soft-wire dachshund and a rescue terrier mix.

“It was a daily struggle,” she said. “I had stuttering and memory issues.”

A rough first semester at TCC prompted her to apply for special accommodations, offered to students with disabilities. Being granted extra time for tests and recording classroom lectures set her up for success. Now the Phi Theta Kappa member is bound for Old Dominion University to work toward her bachelor’s in fine arts.

This semester as a work-study student at the Center for Military and Veterans Education, she also connected with other military-related students returning to school.

Her plan is to grow the business while attending ODU.

“With the tools TCC has given me in a business degree and all the tools from my past and what I’m going to learn at ODU, I can be more successful in business and hopefully become more well-known in the area. This last semester, everything came together at TCC, and I’m grateful for that.”