Five years ago Kenneth Moody started at TCC, where he worked his first job, met professors who remain mentors and graduated with an associate. 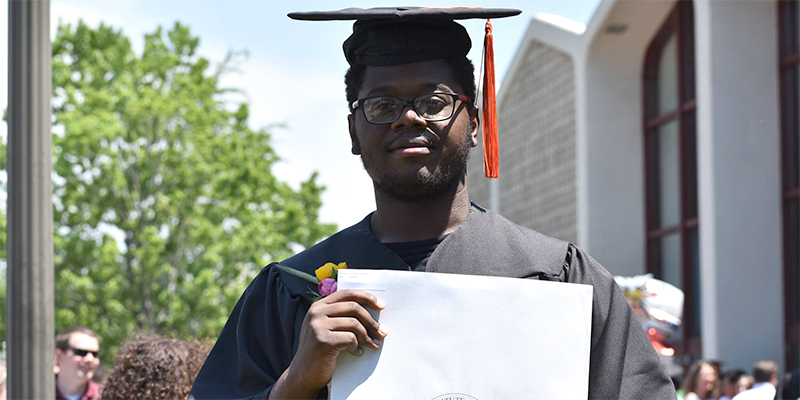 Kenneth Moody is a graduate of Virginia Tech’s engineering program headed for a transformative year in Taiwan.

Five years ago Moody was directionless until he started at TCC, where he worked his first job, met professors who remain mentors and graduated with an Associate of Science in Engineering.

“I had so much support at TCC – the support of just about every professor I had, which, if you think about it, is amazing,” Moody said. “The foundation and preparation I got were strong, without a doubt.”

Moody navigated hard times that began when his father lost his job the day after Kenneth graduated from Green Run High. The family lost their home and took refuge in a small car with little to eat beyond fast food and saltine crackers. A house in Portsmouth without heat, a refrigerator or furniture became home and the reality of an education became real when he visited the Portsmouth Campus.

Moody was a math whiz – imagine scoring a 5 on an AP calculus test – and financial aid covered his tuition. He became president of Mu Alpha Theta, the math honor society, and reveled in tutoring struggling students at TCC’s Learning Assistance Center.

Those were skills that he found immeasurably helpful at Virginia Tech, where initially he was stumped by a more formal environment with faculty than the community feel he found at TCC.

“I’m not that social and at Tech I learned I needed to take the initiative,” Moody said. “Once I started building relationships and networking, I was successful.”

Moody went to Tech with the intention of working as a mechanical engineer in automobile safety. He also pursued his love of languages by learning Mandarin Chinese, a skill he serendipitously realized could impact his career.

While completing a postgraduate summer research project in material science, he found his Mandarin skills useful in translating documents. When the opportunity arose to study Mandarin for a year at National Taiwan Normal University, Moody jumped at it. What he thought was little more than a hobby evolved into a marketable skill to potential employers with business ties abroad. A partial scholarship will help cover costs.

Moody, who just arrived in Taipei, said TCC will always be special a special place for him, noting, “I definitely have TCC roots. There was so much going on around me when I was going to TCC. Going to class, I always had a cloud of doubt around me. The support TCC gives students is really invaluable.”