TCC alum earns master’s in surgical assisting despite the odds 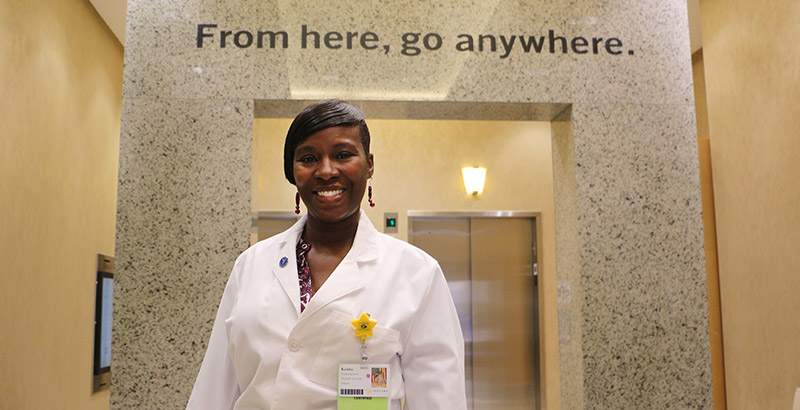 “It’s amazing to be doing this work. I absolutely love it!” Jackson said. “The surgeons I work with now trust me to close on my own.”

She got her start at Tidewater Community College’s Norfolk Campus.

Jackson grew up in Calvert Square and saw her share of gun violence, poverty and drug use in her own apartment. She lost seven friends to shootings during her childhood.

She lived with her mother and grandmother, but life spiraled downward when, at age 6, Jackson lost her grandmother. She and her sister, often hungry, resorted to “borrowing” food from neighbors, sometimes three times a day.

“When you grow up in that much dysfunction, school can be a real challenge,” Jackson said. “It’s hard to focus.”

In high school, Jackson’s grades suffered. She skimmed textbooks to pass exams, but never learned how to learn.

After having a baby at 17, Jackson knew she needed to turn her life around. She tried enrolling at Norfolk State University but was denied because of grades.

Jackson came to TCC for a second chance.

“When I started at TCC, I knew so little,” she said. “I took the placement tests and had to start at the bottom and work my way up.”

Jackson found the support she needed at the college.

“There’s no way I’d be where I am today without the people of TCC,” she said. “They taught me how to think critically and basically held my hand until I could walk on my own.”

Jackson began studying criminal justice but changed course when a STEM advocate, Susan Fincke, gave her a career assessment test to gauge her interests. Jackson scored high in science and medicine. Fincke encouraged her to change course and believed in her before she believed in herself.

“I always thought I wasn’t smart enough for medicine. But she said that I could do it,” Jackson said. “I had tutors and professors that helped.”

Jackson graduated from TCC with an Associate of Science in Social Sciences and transferred to Old Dominion University to earn a bachelor’s in biology.

When she first applied for the surgical assisting program at EVMS, she was wait listed. A year later, she received a full scholarship.

“It was the most amazing moment,” she said. “I hadn’t even applied for scholarships and here I was in the financial aid office being offered a full ride.”

Jackson graduated from EVMS with a master’s in surgical assisting and went right to work.

“One minute I’m cleaning hotel rooms for $9 an hour, the next I’m earning three times that much working in operating rooms,” she said.

Jackson is the mother of two boys, ages 7 and 18. She recently moved them out of public housing. “We have a townhouse in a good area with decent schools,” she said. “It’s still a struggle, but so worth it.”

Jackson and her sons attend Calvary Revival Chapel. “A lot of people tell me I did so well. But I know God opened doors that I never could have imagined,” she said. “I’ve worked really hard, and I know that if I could do it, others can, too.”

Jackson encourages girls in similar circumstances to push for graduation and dream big. “If you reach for the moon and only grab a star, then so be it. At least you got that star.”