“TCC came through for me at the last minute.” 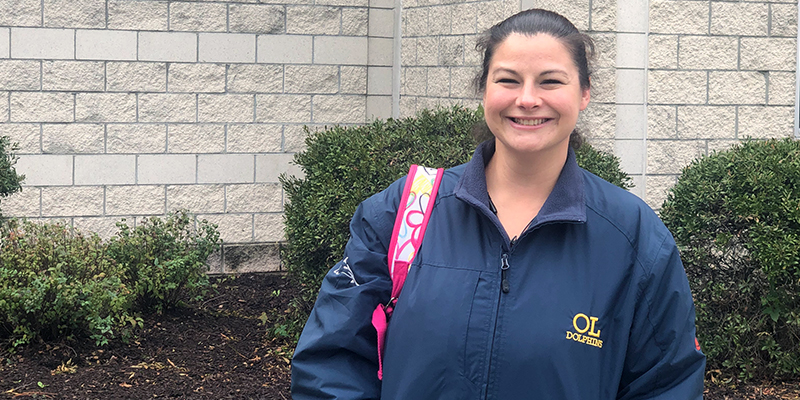 Growing up, Kendra Mack wasn’t pushed to go to college.

After graduating from Ocean Lakes High School in 2004, she worked a trio of low-wage jobs.

“My family never talked about that,” Mack says.

In a few weeks, Mack will graduate with an Associate of Science in Science from Tidewater Community College. She’ll walk at TCC’s 69th Commencement Exercises on Dec. 16 – a milestone, she says, that will signify all she’s had to overcome to reach a goal she set for herself.

Her three children ages 6, 4 and 3 will be in attendance along with husband Hershel, also a TCC student.

“It will symbolize the first step of completing something,” says Mack, who is the first from her family of four to graduate. “It hit me when I had my daughter three years ago that I have to show her she can do anything no matter what.”

So much could have derailed Mack’s progress. Right before fall semester, she wasn’t sure how she would find the funds to pay for her final 16 credits.  A last dollar scholarship from the TCC Educational Foundation took care of $413 in outstanding tuition due.

“TCC came through for me at the last minute,” Mack says. “I wouldn’t be able to graduate otherwise. My whole time here I haven’t had to pay for anything except for my books.”

Her introduction to the college dates back to 2007 when Mack completed the Nurse Aide Training program paid for by her employer, Atlantic Shores Retirement Center. She worked there for six years, cherishing the relationships she formed that extended to the families of her patients.

“It fueled my drive to work toward becoming a nurse,” Mack says.

But motherhood interrupted her studies and then tragedy. A self-inflicted gunshot wound took the life of her father, a former Marine, who, after seven tours in Iraq and Afghanistan, suffered from Post-Traumatic Stress Syndrome. Reflecting on his memory nearly five years after the loss brings fresh tears.

“I closed off and became a shell of a mom for three years,” she says.

When daughter Aaliyah was born, Mack realized she needed to move forward to be an example for her children. She became an avid runner, losing 70 pounds, hearing her father’s encouraging voice urging her on before every finish line.

She also realized she had put her education on hold long enough. A year and a half ago, Mack returned to TCC full time, balancing childcare with homework, both with the support of Hershel. Her next step will be a bachelor’s in nursing.

Mack, 35, knows her father would be proud of her last four semesters on the TCC President’s List.

What would he say?

Mack smiles in thinking of the response. “I knew you had it in you, baby girl, the whole time.”