Scholarship recipient set to launch a future that includes tuition at NSU, a stipend and a job waiting

Robinson’s TCC professors tipped her off to the National Science Foundation CyberCorps Scholarship for Service, which pays tuition and fees for the final three years of study for a bachelor’s degree, and gives the recipient a $22,500 living expense stipend. 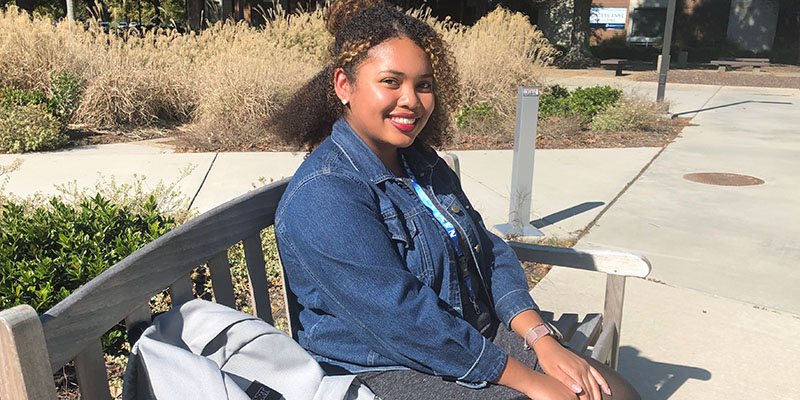 Kayla Dio Robinson’s future is taking off, thanks to earning a scholarship opportunity that pays for her bachelor’s degree, provides a healthy stipend, and guarantees her a job afterward.

Robinson will receive her Associate of Science in Science with a Specialization in Computer Science at Tidewater Community College’s 67th Fall Commencement Exercises on Dec. 17 at the Ted Constant Convocation Center.

Next, she heads to Norfolk State University to work for her bachelor’s in computer science with a specialty in information assurance. A government job will be waiting when she graduates.

Robinson’s TCC professors tipped her off to the National Science Foundation CyberCorps Scholarship for Service, which pays tuition and fees for the final three years of study for a bachelor’s degree, provides book and health insurance allowances, and gives the recipient a $22,500 living expense stipend.

TCC and NSU partnered in the initiative, which addresses the need for a diverse group of qualified computer, network security and cybersecurity professionals. It requires the student to serve in a branch of the government for three years after graduation.

After Robinson met with Graham to tour the NSU Institute, which has been designated as a center of excellence by the National Science Foundation, he offered her the scholarship.

“It was just amazing to hear about,” she said.

The Salem High School graduate wasn’t a confident student when she entered TCC and was undecided on which career path to follow. Because she wasn’t set on a major, she liked the idea of exploring possibilities at TCC without accruing significant student debt.

“I figured it out here,” said Robinson, who started with interior design classes before moving into engineering.

That was a giant leap, but she’s always loved space, admiring what NASA represents. While at TCC, she participated in a NASA program that allowed her to attend a social at Kennedy Space Center for a rocket launch. Later, she took part in the NASA Community College Aerospace Scholars summer program, which included a four-day engineering workshop at NASA Langley.

Robinson realized she favored the programming aspect of her engineering classes at TCC, and she switched her path to computer science. Admittedly, she hopes that government job ends up being at NASA.

“I’m open to anything; it all sounds interesting,” she said. “I would love to work for NASA, though. That’s the dream job.”

As for that stipend, Robinson, of course, has plans for that.

“I’m finally going to buy a car,” said Robinson, as her 1994 Jeep can no longer get her to class. She made a computer program to help her choose the most fuel-efficient model.

Robinson will graduate alongside her boyfriend, Jared Austin, earning his Associate of Science in General Studies. Her mother, sisters and grandparents will attend the ceremony, and her father will also be making the trip from Illinois.