Speaker thrilled to be graduating for the first time 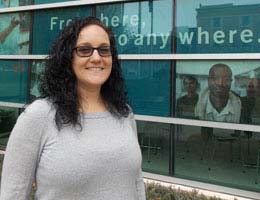 Crowe, 30, is the student speaker for Tidewater Community College’s Fall 2014 Commencement Exercises, to be held at the Ted Constant Convocation Center on Dec. 18 at 7 p.m. She graduates with an Associate of Science in Social Sciences.

“I missed out on my high school graduation and never went to prom or anything. This is a big deal for me,” Crowe said. “Aside from raising my children, graduating from TCC is the biggest accomplishment of my life.” She added that she took most of her courses online, often studying after the children were asleep.

She added, “I wanted to be student speaker, so I could tell people that it’s never too late. Even if you fail, you can pick yourself up and start again.”

Crowe began her educational journey at TCC six years ago, after earning her GED. “My years at Maury High were difficult. I ended up jumping from place to place after my parents divorced, and I simply could not keep everything going,” she said.

Crowe moved to Philadelphia for a time, but returned to Norfolk, the place she has always called home. Soon after, she had a son – Maddox, now 10 – and married his father, Jeremy. The couple also has a daughter, Maysen, age 3.

“I decided that I needed to be a role model for my son,” she said. “It was then that I began my journey to this degree.”

Crowe started off well at the college, but life got in the way again. “I ended up on academic probation, and I basically quit. As I watched my son succeed in school, I knew I had to go back,” she said. She credits Meredith Pollard, a financial aid and satisfactory academic progress advisor on the Norfolk Campus, with helping her get back on track.

Crowe completed her coursework last summer, and is now studying human services and psychology at Old Dominion University (ODU). “I know I wouldn’t be at Old Dominion if not for my start at TCC. My time at TCC showed that I have what it takes to do the work,” she said.

“I have to give credit to my husband, also a TCC alum, for his support,” she added. “I can think of a million times when he was more excited about my degree than I was. He was always there encouraging me.”

Crowe hopes to work in criminal rehabilitation or alcohol and drug counseling, when she completes her bachelor’s at ODU. “I grew up around all of that. My best friend died from a heroin overdose, and that really affected me,” she said. “I really want to give something back.”