He had no footsteps to follow. So TCC grad forged his own path

“When I started at TCC, I didn’t know how to be around positive people – people with goals. It was different where I came from. I’ve learned so much here.” – Kareem Etheridge 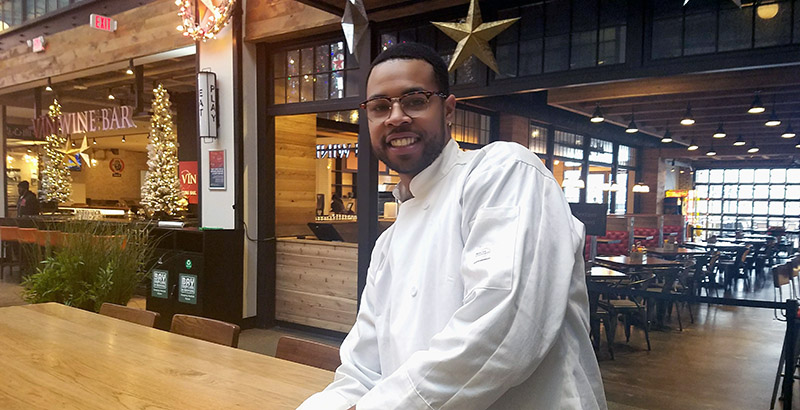 Instead, Etheridge is graduating from Tidewater Community College with an Associate of Applied Science in Culinary Arts and talking about the someday restaurant he wants to call Kareem the Dream Food Palace.

“It took me a long time to trust, but the people of TCC believed in me, loved me and showed me that I could be whatever I desired to be. They accepted me and didn’t judge me and inspired me to keep moving,” said Etheridge, 29, the first among his 12 siblings to earn a college degree.

His grandmother kept him straight as a youngster, but her passing when he was 10 forced him to grow up fast. He was 13 when he started working in fast food to help his mother with rent money. He struggled with grades, escaping with football by playing a couple of seasons at both Ocean Lakes and Nansemond River high schools.

He wanted to have two parents in the stands, but he had only one.

“I thought I’d follow in my father’s footsteps, but he was never there,” Etheridge said. ‘It’s hard as a male not to have a father figure and watch your mother do it all herself.”

Directionless, he mimicked the lifestyle he saw on the streets of South Norfolk. He drank. He smoked. He did things he wasn’t proud of.

But he also realized he didn’t want to be another grim statistic.

“Everybody around me was dying on the streets,” he said. “It was time for me to make a change in my life. I knew if I didn’t my life would end.”

“I basically came to the end of myself and gave my life to God,” he added. “I stopped giving my love and loyalty to the wrong people.”

In 2013, Etheridge cut his dreadlocks, moved in with his sister and enrolled at TCC’s Norfolk Campus all in the same week. Growing up, Etheridge found a passion for cooking while working alongside his grandmother. When he started school, his mother encouraged him to pursue culinary arts.

He didn’t just find food at TCC. He found friends in Emanuel Chestnut, dean of Student Services on the Norfolk Campus, and staffers Sonya Fitchett and Tramisha Croker. He also found support in the Student African American Brotherhood, a student organization designed to empower and engage young men.

“They became my mentors,” he said. “When I started at TCC, I didn’t know how to be around positive people – people with goals. It was different where I came from. I’ve learned so much here.”

Chestnut could not be more proud.

“He was not going to allow his circumstances to define what his future would look like,” he said. “He was going to be the author of his story and not someone else.”

Today, Etheridge cooks in three places: The Harbor Club, Stripers Waterside and Palm Gardens, a Norfolk catering venue. He continues to plan out his dream restaurant that will feature Southern food like your grandmother’s best.

Etheridge is already paying it forward. A classmate who fell on hard times has moved in with him. The two will walk the stage together on graduation day, Dec. 18.

“I thank God every day for saving my life,” he said. “I know it’s not about money, cars, what you can get. It’s about what you are doing for others. What you can give.”

Etheridge shares these encouraging words for anyone struggling to make a go of it.

“Whatever you love and have a passion for – do that! The world is yours and everything in it.” he said. “You hold the keys to your own destiny.”