Computers for Student Success president emulates the life of King by giving back in big and small ways. 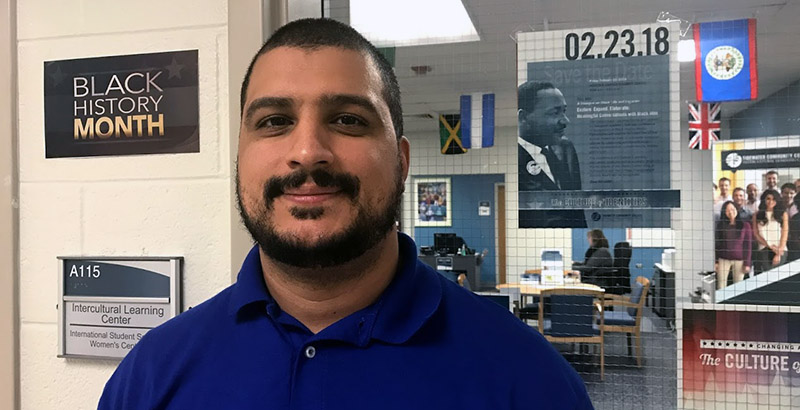 Johvanny Torres makes it his mission to help, whether getting a stranded motorist on the road, explaining a computer error message to a struggling student or coming to the rescue of an entire apartment building of displaced residents after a catastrophe.

The Tidewater Community College student isn’t looking for payment or even thanks. He’s simply honoring the father he lost at the age of 13 by making the world around him a better place day by day.

Torres, 34, is the recipient of the college’s 2018 Martin Luther King Jr. Scholarship, which will be awarded on Feb. 23 at a half-day conference titled “TCC 360: A Dialogue on Black Life and Legacies.”

The former Marine dates his community service efforts back to his childhood in north Philadelphia when something as simple as picking up trash made an impact. At TCC, he took a semester off when residents at Wayfair Apartments in Virginia Beach had their leases terminated abruptly after Hurricane Matthew damage and ensuing asbestos removal.

Torres fought for tenant rights with city officials and connected as many residents as he could with resources to help them with moving, food and furniture.

More recently, he helped with an initiative on the Virginia Beach Campus. As president of Computers for Student Success, he was the inspiration behind the idea to provide single mothers and military moms with Chromebooks before the holidays.

The idea was born after Torres experienced the challenges of single parenthood firsthand, caring for his 2-year-old son, Kavon. The night before a pre-calculus test, Kavon was sick, something Torres hadn’t faced before.

“I wasn’t ready for it,” he admitted. “He wanted me to hold him all night. I was supposed to be studying and getting ready for a test.”

That’s when he realized how often single moms go it alone. On Dec. 16, Computers for Student Success handed out 55 Chromebooks in gift boxes.

Torres is working toward his Associate of Applied Science in Information Systems Technology. He plans to transfer to Old Dominion University to pursue a degree in computer engineering after he graduates from TCC in spring 2019.

He is also active with TCC’s Veteran Mentoring Program and Student Government Association. Typically, though, most of Torres’ service is on the fly. In helping a student who had come by campus to pick up her refurbished computer, Torres walked her to her car, which didn’t start. He took a peek under the hood, drove to a nearby auto supply store to get the parts and fixed it himself.

Torres’ admiration for King dates back to his middle school days when he wrote an essay on the Civil Rights advocate.

“He had a way of using words to get people’s attention,” Torres said. “If he didn’t have your attention, he would show you. He was a man of action.”

The TCC scholarship recognizes a student who exemplifies the teachings and example of King.

When Torres receives his scholarship later this month, four of his nieces and two nephews will be in attendance. “Whenever something happens to me, a milestone, I want them to be there,” he said. “I want them to see all you can achieve.”