She had a brain injury. Now military vet has a college degree and a future in engineering

“Don’t quit because you have a bad semester,” says student speaker Jessica Evans, who follows this mantra: “Come as you are, but don’t stay as you were.” 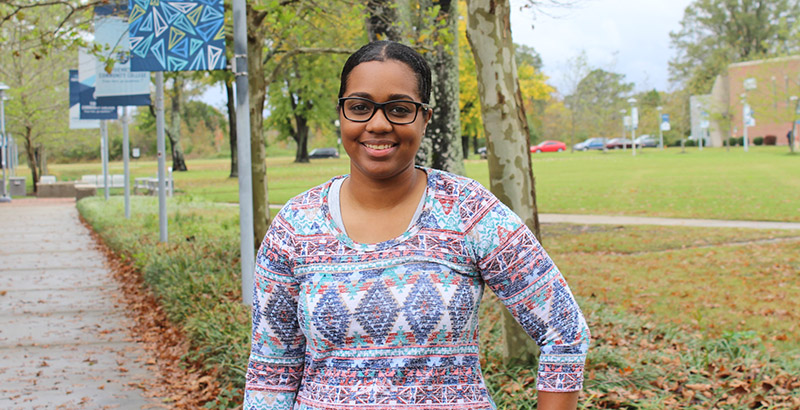 Jessica Evans knows what it’s like to fall asleep on a park bench and to hear the words “traumatic brain injury” applied to her.

On Dec. 18, she’ll know the feeling of graduating from college. The student speaker for Tidewater Community College’s 65th Commencement Exercises will graduate with an Associate of Science in Business Administration.

“When my son is a teenager, I want him to know that you have to make a decision about who you want to be and how you want to be it,” Evans said. “Your circumstances don’t have to dictate your future. Whatever you decide, stick to it. That’s the most important thing I learned here in my time at TCC.”

Evans will transfer to Norfolk State University this spring to major in construction technology. She aspires to be an environmental engineer, a field she discovered after immersing herself in an environmental science class at TCC.

It’s a path Evans, 26, would have never anticipated growing up in inner-city Fort Pierce, Fla. She joined the Army National Guard before her 18th birthday to escape what she calls an unstable upbringing that included being homeless for a time.

During a six-month deployment in Iraq, Evans sustained a blow to the head that returned her to her duty station in Virginia Beach. When a physician diagnosed her with a brain injury, she dismissed the idea.

Yet Evans saw how easily she’d become frustrated; dirty dishes in the sink would spiral into an argument with her fiancé. Nightmares disrupted her sleep. She avoided crowds and noise.

Giving birth to son, Aaron, in 2015 motivated her to finally seek counseling for post-traumatic stress disorder. That’s where it crystalized that she lacked any marketable skills needed to secure a future.
Jessica Evans in her own words

“I did terrible,” she confessed. “I had been in honors and AP classes in high school, but I never had to study hard, and that was before I had a brain injury.”

Instead of taking 17 credits and working full time off campus, Evans reprioritized for spring semester. Her study habits improved with the help of TCC’s Math Lab and Learning Assistance Center. She began a work-study position with the Center for Military and Veterans Education on the Portsmouth Campus, helping others use their GI Bill® benefits as she did to pay for college.

“I felt this sense of community and sense of authenticity from all of them, and that made me realize I wanted to get more involved on campus,” she said.

Evans is secretary of Phi Theta Kappa, the honor society for two-year colleges, and a student ambassador. Desiring to have what she calls “the full TCC experience,” she scheduled her classes to include at least one on each of TCC’s campuses.

“It’s crazy how different all four campuses are; it shows the diversity of the student body, and I think that’s awesome,” she said. “Portsmouth is home. It has the feel of a small liberal arts campus.”

Her first day on the Chesapeake Campus, she was unsure of how to find her class only to be surprised to have a student she had never met walk her to the classroom.

“The Norfolk Campus has this metropolitan feel and there’s great food everywhere,” she said. “I love the Virginia Beach Campus because of its strong military presence. And there’s this beautiful fountain in the center of campus where you can relax and have a wrap between classes.”

Graduation night will be special to her with her husband Nathan in attendance along with Aaron and extended family. Her student speech will focus on the importance of what she calls being “the active ingredient” in your own life rather than letting past events define it.

“I know a lot of students who aren’t planning to walk, and I always ask them why,” she said. “‘Didn’t you struggle, cry, stress out, drink way too much caffeine and binge watch too much Netflix to recoup from exams? That’s the college experience. Be proud of your degree and your college experience at TCC.’

“I gained the confidence to do something and do it well. I’m proud of that.”