Neil was a young Navy wife when she arrived in Virginia Beach. “On active duty, it’s not uncommon to move every two years, and that’s the mode we were in,” she says.

“We were busy raising our two children, but I knew it was my time to go back to school,” Neil says. 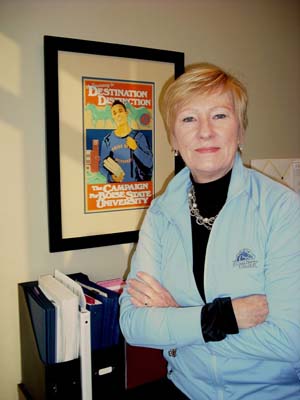 Passionate about interior spaces, Neil opted for Tidewater Community College’s Interior Design program. She kept a high GPA and as a consequence was inducted into Phi Theta Kappa and worked hard to earn her degree.

“The program taught me so much,” she recalls. “From the critical thinking skills to the cutting edge design training, the teachings have stayed with me.”

Neil was successfully employed with a Virginia Beach design firm when the Navy transferred the family again.

“It’s part of life, moving with the Navy,” Neil says. “So we set out for the Naval Academy in Annapolis. My design work continued with consulting work in the new location.”

Neil also became involved with the Navy Wives group, where she began her foray into fundraising. “My love of working with people transferred to this new endeavor well,” she says. “And I enjoyed raising funds for student scholarships.”

A natural fundraiser, Neil was soon employed in the development office for the U.S. Naval Academy. While there, she established a planned giving program that is still used today. “This job launched me in a new direction,” she says.

After eight years, Neil moved to the Chesapeake Bay Foundation and developed its planned giving program. She currently works at Boise State University as executive director of planned giving and serves as the campaign officer for the Alumni and Friends Center.

“I love what I do because I enjoy talking with people and learning their stories,” Neil says. “It’s a noble career, and I am enriched by my work.”

Neil also shares her time with the Assistance League of Boise and is the treasurer of the Planned Giving Council of Southwest Idaho.

In her free time, Neil enjoys golf and spending time with family and friends.