Whether you're looking for your first career or transitioning into another, consider making your future brighter by learning a trade 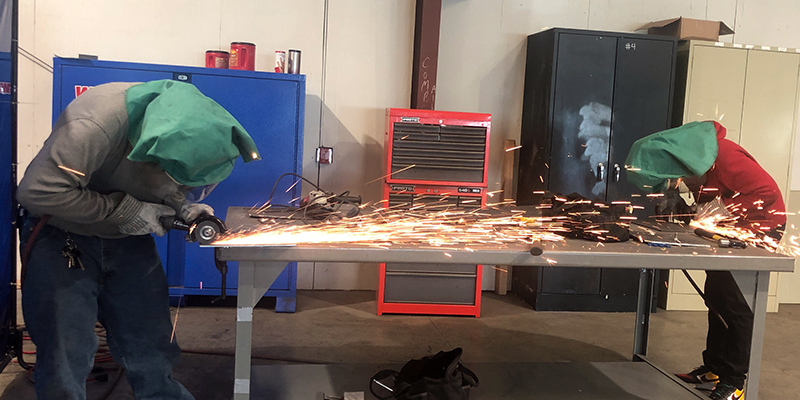 Kyle Cooke is ready to build a future. Navy wife Marcy Camacho wants to prepare for a leadership position. Devin Wilson needed a new career after more than a decade as a trucker.

All of them found opportunity at TCC’s Skilled Trades Academy where they are part of a two-week training program in sheet metal that will lead to full-time employment at Newport News Shipbuilding (NNS). As part of the pre-hire program at NNS, they pay $250, which they are then reimbursed for upon successful completion of the class. They receive safety training and are then hired, making upward of $19 per hour.

Sheet metal specialists are responsible for the majority of the interior finish work on Navy vessels. Instructor Frank Yandle says seeing your finished work is among the joys of the job.

“There’s a pride component,” he said. “These students come right in and are able to contribute.”

The training has a classroom component that includes basic mathematics – adding, subtracting, multiplying and dividing fractions – and teaching measures. Students learn how to use approximately 26 hand tools, including drillers and grinder and are hands-on the very first day.

Cooke, 24, enjoys working with his hands and grew tired of low-paying jobs that didn’t offer advancement.  “I needed something that was going to give back to me in the long run,” he said.

Camacho returned to the area after her husband’s deployment ended. Her background was as a caregiver, but she’s embracing a different kind of challenge.

“I was a little intimidated at first, but once I got into learning the power tools, it was great,” she said.

Wilson drove a truck for 14 years but now wants a more stationary role. With a toddler, insurance benefits are increasingly important. “I need a career where I can grow,” he said.

A background in sheet metal or any other trade isn’t required. Yandle, retired after nearly 40 years working at Norfolk Naval Shipyard, works one-on-one with students when needed. “You’re not just learning a job,” he said. “You’re learning to be a craftsman.”

Employment of sheet metal workers is projected to grow 8 percent from 2018 to 2028, faster than the average for all occupations, according to the U.S. Department of Labor.

Interested in learning a trade that leads to employment? Contact TCC’s Stan Ashemore at sashemore@tcc.edu. The Skilled Trades Academy is located at 3303 Airline Blvd., in Portsmouth.