“I tell people all the time about TCC,” says VP of corporate communications at Retail Alliance 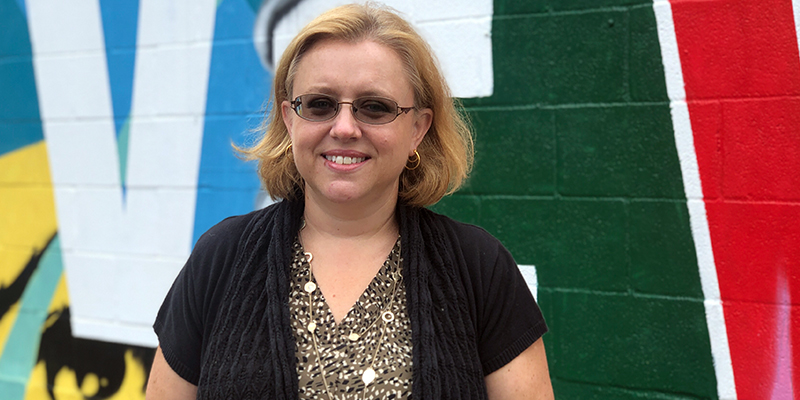 Kylie Ross Sibert worked on multiple continents before moving to Virginia Beach from Shanghai in 2010.

Despite more than a decade of work experience in marketing research, she wanted additional skills, particularly in graphic design, to give her resume an edge. A search led her to Tidewater Community College.

Today the vice president of corporate communications for Retail Alliance revels in the position that meshes together all of her strengths.

The native Australian got offered a job by the nonprofit trade association located in the NEON District of Norfolk while finishing up her Associate of Applied Science in Graphic Design at TCC, initially hired as the director of communications.

“I would have never gotten the job if I didn’t have the education from TCC,” said Ross Sibert, promoted to her current role two years ago. “I had never done graphic design before; I used to create things in Word or Publisher. It was a huge benefit for me to have those graphic design skills to add to my resume.”

After positions in Australia, New Zealand and China, Ross Sibert immigrated to the United States to be closer to her sister in Hampton Roads. Though she previously completed some technical college classes, she wanted a stronger foundation. The hands-on classes at the Visual Arts Center taught her concepts she had never considered important before.

“I learned typography, something I had never thought of in terms of what I was doing,” she said. “The advertising class I took taught me about simplifying a message, and it included design. That was helpful because I had not done the marketing side of advertising before.”

Ross Sibert chuckles when recalling that she attended class nine months pregnant with her son, grateful when he was born Dec. 8. Given the serendipitous timing, she missed no classes.

“It was perfect,” she said.

In addition to becoming proficient in the Adobe Creative Suite, Ross Sibert enjoyed bouncing ideas off classmates. For so long, she had completed her communications to-do list in a silo, a one-woman shop.

An unexpected bonus of her TCC education: the college’s International Student Service advisers. The one-on-one help from staff answered all the questions she had as an international student.

“I tell people all the time I went to TCC,” Ross Sibert said. “For me, as an international student, it gave some legitimacy to having an education in America. I use what I learned every day.”